Investigators have open mind on whether fire was accidental or intentional 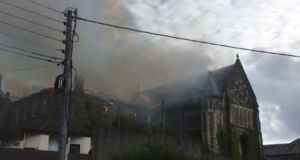 The blaze broke out at the former Sisters of Mercy convent on Cork Road in Skibbereen around 4pm on Tuesday and units of Cork Co Fire Service from Skibbereen, Schull and Bantry were sent to tackle the blaze. Photograph: Barry Roche

Gardaí in West Cork have requested the assistance of the Garda Technical Bureau in Dublin to try and establish the cause of a fire which destroyed a former convent in Skibbereen on Tuesday.

Officers believe the fire that gutted the former Sisters of Mercy convent and adjacent chapel on Cork Road in the town was started by people on the site either accidentally or intentionally.

They are satisfied that there was human involvement in the fire as there has been no electricity supply to the building for some time so the blaze could not have started as a result of an electrical fault.

However, they are keeping an open mind as to whether the fire was started accidentally by people who may have been sleeping rough or drinking there and lit a fire, or maliciously by someone with a more sinister intention.

They have requested the services of the Garda Technical Bureau in Dublin to see if they can find any trace of accelerant such as petrol on the site but the task has been made difficult by the extent of the damage and size of the site.

A Garda source confirmed that the fact that the roof of the convent building had collapsed and fallen on to the ground made the examination of the ground floor to find the exact point where the fire may have started very difficult.

“There’s such much debris there with charred timbers from the roof after collapsing that actually finding the source or seat of the fire is a challenge in itself, let alone establish whether it was started accidentally or maliciously.”

Gardaí have found a large number of beer cans strewn about the site suggesting it was used by people holding drinking parties but gardaí have not be able to establish as of yet how recent these gatherings may have been.

They have also found sleeping bags in the former Mercy Heights School building, which was undamaged in the fire, at the rear of the campus, suggesting that the area may have been used by people sleeping rough.

Gardaí say they are keeping an open mind as to whether a fire may have been lit by those visiting the site and that it may have been left smouldering after they left the area and accidentally spread to the convent building.

Meanwhile, developer Paul Collins told The Southern Star newspaper that he was sending a team to Skibbereen to ensure that parts of the building left structurally vulnerable by the fire could be made safe and secure with supports.

CEO of Remcoll Capital, Mr Collins said the company was planning a €10 million redevelopment of the now gutted convent and chapel and would honour a deal to buy the complex from existing owner, Bernard Hennessy.

He told the paper that Remcoll had agreed to buy the complex from Mr Hennessy subject to planning but that Remcoll would complete the development, notwithstanding the damage caused by the fire.

Just last week, Cork County Council granted planning permission for the former chapel to be redeveloped as a commercial hub, including hot desks for use by the community and the convent to be converted into apartments.

Cork County Council also granted planning permission for the construction of 52 new apartments as part of a four-storey apartment block on the site which has been vacant for a number of years.