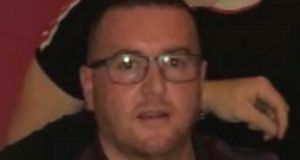 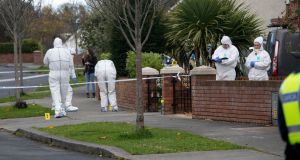 Gardaí at the scene of the shooting in Castlemartin Drive, Bettystown. Photograph: Colin Keegan/Collins

Gardaí have appealed for witnesses to the murder of Richie Carberry who was shot dead in Co Meath this week.

The 39-year-old was shot several times in Bettystown shortly before midnight on Monday. He was taken from the scene in Castlemartin Drive by ambulance to Our Lady of Lourdes Hospital in nearby Drogheda and pronounced dead shortly before 1am.

The fatal gun attack marks a significant escalation in the Drogheda gangland feud despite extra Garda resources having been deployed to stem the violence. A protracted series of non-fatal gun attacks, petrol bombings and beatings has now given way to more clinical and well-planned murderous gun attacks. Keith Branigan, a 29-year-old from Drogheda, was shot dead at the Aisling Caravan Park, Clogherhead, Co Louth, in late August. His was the first fatality after 13 months of feuding.

The feud is a drugs turf war between two criminal gangs based mainly in Drogheda, Co Louth, but with members living through Louth and Meath. It began in July 2018, when a Drogheda drug dealer was shot and left paralysed but survived his injuries.

Gardaí are appealing to anyone who may have seen a Peugeot BipperVan with the registration (08 D 124410) that was found on fire in Eastham Road in Bettystown shortly after the shooting on Monday.

It was bought in south Dublin on September 27th and investigators are aware that it was parked in the vicinity of Castlemartin Close and Eastham Close between October 30th and November 4th.

Gardaí are also looking for information on a Blue Ford Fiesta (06 D 80706) which may have been in the vicinity of Eastham Court, Eastham Road or the general Bettystown area in the days and weeks leading up to Monday’s attack.

“This car was found burnt out at The Grange, Ballyboughal, Dublin following the fatal shooting incident. Gardaí are appealing to anyone who may have encountered this vehicle between Bettystown and Ballyboughal between the hours of 11.40pm on Monday 4th November 2019 and 12.20am on Tuesday 5th November 2019, in particular road users who may have camera footage, to contact Gardaí,” the Garda press office said in a statement.

Anyone with information is asked to contact Ashbourne Garda station on 01 8010600 or the Garda Confidential line on 1800 666 111 or any Garda station. Mr Carberry’s funeral is taking place in Laytown on Saturday.