Gang feud: Life goes on in Dublin 1, but so does the fear 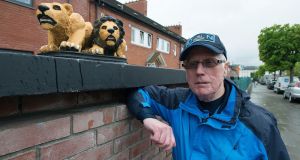 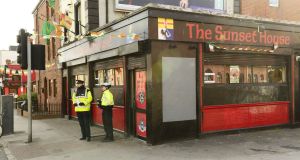 On a pillar outside some houses on Summerhill sit two brightly painted fibreglass lions. “I found them thrown out on the roadside and they were in bits and I stuck them together,” says Peter Wall, a septuagenarian in a Dublin hat. “I fixed them up and painted them. I did their nails and everything.”

He just wants to brighten the place up, he says. “It’s important to get the kids’ minds off what’s going on. There’s nothing around here for them. The fellas selling [drugs] get the kids involved. They give them a few bob and say ‘Would you hold this for me?’”

How have the recent shootings affected people in the area? He puts his finger to his lips as a little boy goes out the gate. “Go out to play son,” he says. “That’s my neighbour. I don’t want him to hear all this.”

He waits until the child has gone. “People are looking over their shoulders now,” he says.

He also wants me to know that it’s a great community.

“Everyone knows everybody. We look out for each other.” His neighbour Agnes is responsible for several colourful plaques and statues that decorate the terrace. “I’m glad you like the lions,” he says.

In a north inner city besieged by the so-called Kinahan-Hutch feud (“a pretty one-sided feud” says one man, summing up the consensus in this neighbourhood), people are getting on with their lives.

These are crimes that cut deep into the community. Many of them know and like the Hutch family and almost all are concerned about the effect that the violence is having on the wider neighbourhood.

“The other day a car pulled alongside me to ask directions and I got the fright of my life. That’s the fear that’s in the community.”

On Wednesday afternoon on Rutland Street, staff from Lourdes Youth and Community Services (LYCS) are distributing plants, flowers and flower boxes to residents of the street from beneath the strange building on stilts in which they’re based. It’s another project designed to brighten up the area. Local people are standing about, considering busy lizzies and pansies.

A young woman called Ann Collins walks by accompanied by a small child with a big bag of compost in her push chair.

“We’ve a little playground up the road and it’s in a terrible state,” she says. “We just want it nice and clean so we’re going to get the kids together to plant some flowers. We want to keep them busy.”

Have they been affected by the recent shootings? She waves her hand. “I can’t talk about that.”

Most people do not want to talk, nor want their names mentioned in a newspaper.

“People feel like one of the gangs have spotters all the time watching who’s going where and who is drinking where,” says Seanie Lambe, chairman of the Inner City Organisations Network. “That all adds to a general sense of unease.”

One women calls it a “sombre feeling”. “You’d know something bad has happened just walking around here,” she says. “Everyone is living on their nerves.”

She gestures in the direction of the Sunset House pub, where Michael Barr was shot (there’s a small bunch of flowers taped to the wall there when I pass and the pub is still closed) and North Cumberland Street, where Gareth Hutch was killed on Tuesday. “And we’re right in the middle here,” she says.

She says she’s thankful her family have all moved out of the area. “But there are a lot of decent people here . . . It’s appalling when you get to the point where you don’t want to say where you live. But I grew up here and I will end my life here.”

Another woman tells me she was afraid even before the shootings. She is being harassed by some of the dealers who regularly gather on Rutland Street selling prescription drugs with apparent impunity.

“This street is like zombie land a lot of the time,” she says. “I can’t get down to my 90-year-old mother’s at the end of the road. I have to walk around the block.”

She starts to cry. “She’s had a dog’s time of it,” says her friend.

“The other night coming out of the chip shop, one of them turned around and shouted ‘slut’ and ‘squealer’ at me,” she says. “If you look at them funny you’re a ‘squealer.’ They make your life a misery. The police don’t care. I rang them and they said ‘You’re blocking the line.’”

Some people tell me that they’re thinking of moving. “I’ve lived here all my life and love the place,” says one. “But it feels like [the killings are] getting closer to where we live all the time.”

“And it’s heart-breaking to hear children talking about who is getting shot, or whose house is being raided or how many police are on the street,” says her friend. “They shouldn’t know that stuff.”

Most people are keen to stress, amidst their fear and confusion, how tight-knit the community is. The area is filled with altruistic projects run by residents, including Inner City Helping Homeless and the North Inner City Old Folks Group.

Some even say that recent events aren’t affecting them at all. Carol Doyle has lived on Rutland Street “since Princess Grace died”. “I’ve been happy since the day I moved in,” she says. “Some locals make a big deal of [what’s happened]. I just get on with it. It doesn’t affect me. It’s a very good, warm, nice community. Nothing has ever happened to me.”

The plants all distributed, a group of people gather for a chat. “We heard the police helicopter overhead the other day,” says one young woman. “And someone said ‘I bet that’s another shooting’. It’s become so standard and run of the mill, I don’t think people see it as a drama anymore. And it’s amazing how quickly the information spreads. Within 10 minutes we knew who had been shot and that they were dead.”

Another man, a teacher, observes that as soon as there’s a shooting the kids in his class will start to get texts. “They jump on their phones and start texting people.”

Tom O’Reilly, manager of the LYCS’s Community Training Centre says: “I worry that this is the new normality for young people . . . I worry it’s the new normality for me. I cycled past the Sunset House a few minutes before that shooting happened and it made me very uncomfortable, but this week it was ‘Okay, another one’ .

“It wasn’t as shocking, which is terrible.’”

The next morning, at a class in LYCS, three teenage boys tell me how the violence has affected them. (These are not their real names).

“The first shooting was a surprise,” says Mark.

But it’s not surprising any more? They shake their heads.

“I worry about little kids who have to witness all this,” says Shane. “If something happened around them they’re going to be terrified out of their minds. It’s not right to have five-year-olds thinking, ‘It’s normal to have gardaí walking around with guns’.”

How do they feel about it? They shrug. “You’d worry if it happens close to your house,” says Shane.

“They’re shooting the wrong people,” says Mark. “It could happen [to you] if you wear the wrong jacket that day. If you’re dressed like someone they’re after.”

They’re not confident about the Garda’s ability to deal with the problem.

“I was reading in the paper that the gardaí can’t be on every corner,” says Mark, “but when the water charges were happening there were gangs of gardaí . . . and the gardaí stop the wrong people,” he adds.

“They’re always stopping us when we’re coming in here to class,” says Shane. “They ask us where we’re going and what our names are. They search us.

“Me and my friend were walking into my house once and we were stopped. ‘Where are you going? Do you live here?’ I said ‘No. I’m breaking in.’ They drove off.” He laughs. “Imagine I was breaking in.”

Even their teacher has been stopped (“Several times,” he confirms).

“You can ignore all this?” says the teacher.

“Yeah. I don’t mind it.” He laughs. “I don’t have a secret place I go to or anything, but nothing has happened to me that makes me want to leave.”

Peter O’Connor of the Community Policing Forum, which endeavours to build links between local communities and the gardaí, says that fear has led to fewer people coming through his door.

“People feel threatened,” he says. “Normal life is not as it should be. Where next? Where’s safe? Sunset House, Avondale House, Sherriff Street and Poplar Row, all in walking distance. Every corner has been affected by it . . .

“Some people have said they actually know the person who carried out the shooting in Sherriff Street but would they go to the gardaí? No . . . The guards don’t have the resources to protect them and they know that. And credit to the guards, they would be upfront about the fact they can’t give 24-hour protection.”

He also tells me about researchers who asked local children what career they wanted to pursue. “Some said, ‘I would be a youth worker or a criminal’ . . .

“They respect youth workers and youth workers respect them. Why be a criminal? They’re the only people they see with the trappings of wealth.”

Seanie Lambe of Inner City Organisations Network, who’s been active in the community since the Concerned Parents against Drugs marches in the 1980s, says that while the feud might involve two families, the drug business it emerges from infects and affects the whole community.

In the absence of real opportunity, he says, a drug economy takes over. Depressed people self-medicate and, I’m told by several people, many in the community are in thrall to gangs as a result of drug debts.

“Poverty and disadvantage are breeding grounds for drugs and crime,” says Lambe, who can rattle off a long list of community and youth projects that were discontinued by the previous two governments.

“It doesn’t take a nuclear physicist to work that out. Unless the State invests in community infrastructure and job creation for young people, nothing will change . . . The problem is rooted in the economic deprivation that’s prevailed [around] here since the Act of Union.”

Nobody seems to know how to tackle the current feud. Everyone agrees that an increased Garda presence is required - Garda resources in the area have been hugely depleted in recent years - but many community workers would like to see a return to a kinder form of community policing that prevailed here in the past.

The community workers I talk to worry about draconian responses that don’t tackle addiction and inequality. Irene Crawley, manager of the Hands on Peer Education group, observes that the interest the media now has in the community could wane very quickly.

“We’ll still have all the reasons people feel undervalued and disenfranchised - and turn to drugs and gangs.”