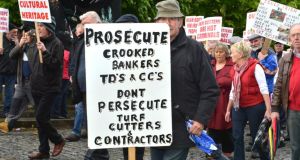 Michael D’Arcy (43) from Ballycahill, Killimor, Padraic Byrne (57) from Main Street, Killimor, Pat McDonagh (43) from Portumna and Anthony Porter (44) from Woodford, posed for photographers as they made their way into Galway Circuit Criminal Court amid cheers from the crowd.

They face prosecution under the European Communities (Birds and Natural Habitats) Regulations 2011, in relation to alleged incidents of turf cutting which allegedly occurred at Clonmoylan Bog, near Killimor in south Co Galway on May 22nd, 23rd, and August 21st last year.

The men are the first to be prosecuted since the EU habitats directive imposed restrictions on turf cutting on 53 Irish bogs, which are designated Special Areas of Conservation.

During the brief hearing, defence barrister Conal McCarthy told Judge Keenan Johnson he was still awaiting disclosure by the State on a number of outstanding issues in relation to the case.

He asked for all four cases to be adjourned until July.

Judge Johnson agreed to adjourn the matter until July 2nd, when a date may be fixed for trial.