Galway hotelier to be sentenced for rape 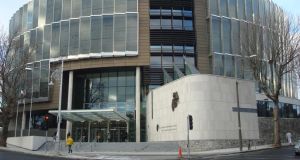 A former Galway hotel owner will be sentenced at the Central Criminal Court in June for the rape of an employee following a staff party.

A former Galway hotel owner will be sentenced at the Central Criminal Court in June for the rape of an employee following a staff party.

Brian Shaughnessy (47) raped the young woman in the Presidential Suite of the Loughrea Hotel and Spa after asking her earlier in the night if he could confide in her and buying her drinks. He was the owner of the hotel at the time which has since been taken over by Nama.

Shaughnessy, with an address at Ballywinna, Craughwell, had pleaded not guilty to rape of the girl at the Loughrea Hotel and Spa in Galway on July 26th, 2010 but was convicted by a jury following a trial last month.

The young woman outlined in a victim impact statement the effect of the rape on her life and family. She told the court “from the moment I left the room I was changed.”

She said she became uptight afterwards and lost interest in her appearance and eating. She said she lashed out at the slightest thing and developed panic attacks.

She became afraid to fall asleep in case Shaughnessy was in her room. When she did fall asleep she said she suffered nightmares about being trapped in a room with a mattress and being raped by men.

She said she had been worried about getting pregnant and contracting sexually transmitted diseases. She had to wait a week to get the all clear and said she should not have been going through that at her age.

“You never took responsibility for what you did” she told Shaughnessy. She said he had taken her innocence, confidence and trust but she now had it back.

“I am handing back the guilt, blame and responsibility for my rape to its rightful owner. It is no longer mine to carry,” she said

Martin Giblin SC, defending, handed in testimonials and a number of reports into court on his client’s behalf. He said business and professional people in the area spoke highly of Shaughnessy.

Mr Giblin said Shaughnessy had run a successful business, made a positive contribution to his community and provided good quality employment for up to 100 people.

He said that once the crash came Shaughnessy “lost everything” and has now been “deprived of the society of his family.”

Mr Justice Garrett Sheehan said he needed time to carefully consider the matter and remanded Shaughnessy in continuing custody for sentencing on June 10th next.