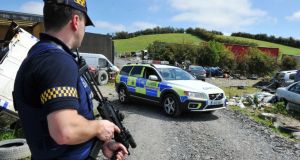 A member of the Northern Regional Response Unit stands guard at the site of a diesel laundry plant in Drumacon, Castleblaney, Co Monaghan. Photograph: Ciara Wilkinson

Illegal fuel laundering is a “war that is not being fought” by State agencies, leaving Border communities vulnerable to the crime gangs which feed off its significant profits.

So says one reliable Border source who is pressing elected representatives North and South for a radical rethink on the current means of allowing farmers and other businesses tax allowance on their diesel.

Some representatives in Stormont and in Leinster House are advocating scrapping the decades-old system of marking tax-rebated diesel with green or red dyes and replacing it with a model used elsewhere in Europe.

The alternative gives farmers and hauliers a rebate on fully-taxed “white” diesel after it has been paid for, with some businesses allowed an upfront allowance to ensure they are not out of pocket while waiting for their repayment to come through.

Diesel laundering is the process whereby cheaper green diesel in the Republic or red diesel in Northern Ireland is washed of its dyes before being sold on by criminals for a much higher price.

Acid washes and commonly-available filter agents are used for this purpose, producing illegal diesel as well as highly toxic waste sludge which is usually illegally dumped. Products marketed for the purpose of laundering diesel are openly advertised online and can be imported.

The loss to the Irish exchequer alone, according to Donegal Senator Brian Ó Domhnaill (FF), is a highly conservative €120-€150 million per year. The equivalent figure for the North is at least £100 million (€115 million).

Social cost
In addition to the threat to the public purse and the environment, there is a social cost. Border communities say they do not know what is and what is not legitimate fuel and they fear the corrosive effect crime gangs have locally.

They fear that the murder last January of Garda Adrian Donohoe – by an armed gang involved in a botched raid on a Credit Union at Bellurgan, Co Louth – will not remain an isolated example. Another Donegal Senator says an all-Ireland response to the scourge is long overdue.

Senator Jimmy Harte (Lab) wants a 32-county regime to tackle the problem, which will remain “until we devise a solution”.

“There is fuel laundering along the Border, from Derry to Dundalk and now as far south as Dublin,” he said. “Some garages reopen the day after being raided. These people are willing to lose the cost of one day’s trading for the massive profits.”

Mr Harte said smuggling had been going on since the Border was established. So far this year, fuel-laundering plants have been uncovered and dismantled in areas as far apart as Tyrone and Dublin. But the practice is highly localised in a strip of Border country reaching from the Cooley Peninsula in Co Louth, across south Armagh to Co Monaghan.

Laundering operations, despite the success of the Garda and PSNI operations, often quickly pop up again, as do illegal fuel outlets. Despite this, some authorities are cautious, if not dismissive, of a new approach to taxing diesel for business purposes.

Minister of State for Finance Brian Hayes said Revenue had made action against illegal fuel-related activities one of its top priorities and had adopted a comprehensive strategy.

“There is an intensified targeting, in co-operation with other law enforcement agencies on both sides of the Border, of fuel laundering,” he said. “That has been ongoing.”

The Irish Farmers’ Association (IFA) is known to be cautious about a shift from the marked fuel regime and its replacement with retrospective tax allowances.

The revenue authorities in the UK are also dismissive of the idea. Her Majesty’s Revenue and Customs (HMRC) is currently involved in a consultation exercise with the Republic’s Revenue Commissioners about the issue. However, some official sources say the rebate system is also open to abuse.

Geoff Riley, a HMRC spokesman told The Irish Times last week that, to date, the ending of the marked fuel regime had “been considered but not approved”.

Irish Revenue sources are sympathetic to calls to end diesel marking. “For us the question is what to do about home heating oil. How do you get around that?” The Irish Times was told. “Perhaps a single marker for the whole of Ireland could help in the fight against fraud.”

The Irish Road Haulage Association and the Automobile Association are more favourably disposed to a new tax-rebate system, as are the umbrella organisations for fuel retailers in Britain and Ireland who are concerned that legitimate retailers are being increasingly undermined by rogue outlets peddling illegal supplies.

The official position of the two governments is to clamp down on the crime gangs while working to improve the agents used as diesel markers. However, as a Border source said to this newspaper: “The launderers have proved versatile, and better markers may just lead to Culloville [Co Armagh] producing better chemists.”

No prison sentences
Despite advances made by the police on both sides of the Border, working alongside the Revenue authorities and the significant numbers of illegal laundering plants uncovered, no one in Northern Ireland has yet been sentenced to prison in connection with the racket.

The recent code-named “Operation Loft” by the authorities led by the Cab in the Republic, which helped smash a multi-million euro illegal fuel ring in the south Armagh-north Louth area demonstrated the reach of such sophisticated operations.

That ring, broken up in March, extended into three locations in the North and across 10 counties in the Republic. Add to that the money-laundering operation needed to disguise and distribute the profits, and the scale of the diesel problem throughout Ireland becomes apparent.