From the archives: Early report of the 1976 Sallins train robbery

Gang made away with IR£200,000 in armed heist aboard mail train in Co Kildare 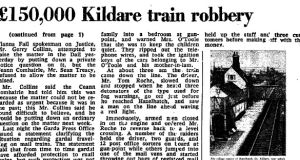 On March 31st 1976, an armed gang carried out a mail train robbery at Sallins, Co Kildare, seizing IR£200,000. Here is an early report of the heist as published in The Irish Times the following day.

April 1st, 1976: The Kildare train robbers have escaped with at least £150,000. The final amount of the haul from the Cork-Dublin mail train will not be known until today, but last night a senior Garda officer said it was estimated that about £130,000 in used bank notes had been taken.

The notes were being brought to Dublin from banks in Cork; another £20,000 worth of postal orders and valuables are believed to have been stolen.

Extra gardaí from outlying areas of Kildare and technical experts from Dublin were yesterday drafted into the area as the massive investigation got under way. Hundreds of local people were questioned and asked if they had seen anything suspicious in recent weeks.

Last night gardaí admitted that they were still not following any definite line of inquiry, but a senior officer, Detective Inspector Reynolds, said: “I think we have made some progress; we have found out a few things, but we don’t really know yet just how valuable they are to us.”

The train was stopped near Hazelhatch , Co Kildare, by one of the 12-strong gang standing on the line waving a red light.

The gang then came up alongside the train, some covering the driver and crew and others jumping into the mail van. They threw down 11 registered mail bags to more members of the gang who loaded them into a van. In their haste the gang left one of the bags lying on the ground.

Two of the vehicles used by the gang were later found abandoned in the Dublin area. It is known that several registered mail bags were left aboard the train, but it is not certain if they contained any more money.

The bank notes belonged mainly to the Allied Irish Bank and the Bank of Ireland; the Ulster and Northern Banks have few branches in Cork.

Surplus notes are sent from the branches to Dublin each week-but not always on the same day-to be either destroyed or redistributed.

There was no security man or garda on the train, and this has already provoked controversy.

The Fianna Fail spokesman on Justice, Mr Gerry Collins, attempted to raise the matter in the Dáil yesterday by putting down a private notice question on it, but the Ceann Comhairle, Mr Sean Treacy, refused to allow the matter to be raised.

Mr Collins said the Ceann Comhairle had told him this was because the matter could not be regarded as urgent because it was in the past; this Mr Collins said he found difficult to believe, and he would be putting down an ordinary question on the matter next week.

Last night the Garda Press Office issued a statement clarifying the situation regarding gardaí travelling on mail trains. The statement said that from time to time gardaí have afforded protection to mail trains, but such protection was not on a routine or permanent basis.

No such protection had been scheduled for the Cork-Dublin mail train, and therefore any suggestion

such as that made by Deputy Collins in the Dáil that the protection had been withdrawn was unfounded.

Mr Collins said last night that it was “a scandalous situation” that enormous sums of money were being carried on trains without proper security precautions.

The drama started at 11.30 on Tuesday night, when three members of the gang held up Mr Patrick Reynolds (28), of Patrick’s Park, Clondalkin, outside his delicatessen on the Palmerston Road, and made off in his van. Mr Reynolds was hit on the head with a gun, and had to have eight stitches inserted in the wound.

An hour -and -a-half later, four of the raiders got into a house at Carneystown Bridge, near Celbridge, Co. Kildare-right beside the railway line-by pretending to be gardaí. They wakened the owners, Mr and Mrs Conal O’Toole and their three young children by hammering at the front door, and Mrs O’Toole let them in when they claimed to be Special Branch officers.

Once inside they, herded the family into a bedroom at gunpoint, and warned Mrs O’Toole that she was to keep the children quiet. They ripped out the telephone wires and took the ignition keys of the cars belonging to Mr O’Toole and his mother-in-law.

At about 3am the - train came down the line. The driver, Mr Tom Roche, slowed down and stopped when he heard three detonators of the type used for fog warnings, go off just before he reached Hazelhatch, and saw a man on the line ahead waving a red light.

Immediately, armed men closed in on the engine and ordered Mr Roche to reverse back to a level crossing. A number of the raiders held the driver, two guards, and 12 post office sorters on board at gun-point while others jumped into one of the mail vans and started throwing out bags of registered mail addressed to Dublin.

The raiders loaded the bags into the van they had hijacked earlier in the night, and made off across two fields towards the road. Before making their getaway in the van and the two cars belonging to the O’Toole family, they drained all the petrol out of a third car parked at the O’Toole house and warned the family not to call the police.