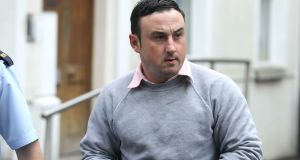 Aaron Brady (29) must be given a term of 40 years for the crime of capital murder when he is sentenced next week. Photograph: Collins

Gardaí have arrested four suspects as part of an investigation into alleged witness intimidation and perverting the course of justice in the case of Aaron Brady who was convicted in August of the capital murder of Det Garda Adrian Donohoe.

During the murder trial a video was taken on a mobile phone of a witness statement that was included in the book of evidence, with the footage posted on social media.

An investigation into the matter, which was not known to the jury members, was begun before the trial concluded and part of that criminal inquiry is also investigating the illegal use of a mobile phone in a prison setting.

The investigation is being carried out by members of the Garda National Bureau of Criminal Investigation (GNBCI) and on Thursday detectives attached to the Serious Crime Review Team, which is within the bureau, arrested four people.

The suspects were detained under Section 4 of the Criminal Justice Act and were being held at Ballymun, Mountjoy, the Bridewell and Raheny Garda stations in north Dublin.

The Irish Times understands at least two of the men were arrested in prison. One of the men is in his 30s and is linked to the Kinahan cartel.

That man is currently serving a lengthy sentence on drug and gun charges. He was previously questioned about the murder of drugs gang leader Eamon Dunne, Finglas, Dublin, who was shot dead in April, 2010.

One of the other men is in his 20s and is from north Dublin but is linked to a drugs and armed robbery gang in the north inner city. He has convictions for gun crime and has served a number of prison sentences.

Co Armagh man Brady was convicted on August 12th of the capital murder of Det Garda Donohoe by a majority verdict and is due back before the Central Criminal Court next Wednesday, October 14th, for sentencing.

Brady (29), a married father of one, must be given a term of 40 years for the crime of capital murder when he is sentenced next week.

He and his colleague, Det Garda Joe Ryan, were providing an armed escort for Credit Union staff taking money to a night safe.

Brady, from Crossmaglen, was part of a five-man gang laying in wait in the credit union car park to steal the cash. Four of the gang members emerged from behind a wall in the car park and Brady ran at Det Garda Donohoe, fatally shooting him.

As well as finding him guilty of capital murder, the jury at the Central Criminal Court convicted Brady for his role in the robbery. After the murder, Brady fled to the US. He was arrested in New York in May 2017.

Brady was deported to Ireland days later and once back in Ireland was convicted of a series of offences committed in Dundalk, Co Louth, in October 2012, including dangerous driving and criminal damage. He was jailed for 18 months after pleading guilty.

By the time that sentence was served he had been charged with the murder of Det Garda Donohoe and remained in prison on remand awaiting his trial, which began in January.

Attempted intimidation of witnesses was a significant factor during the Brady trial. The prosecution said it was aware of “very serious” but unsuccessful attempts to intimidate its key witness.

The video of the witness making a statement to gardaí implicating Brady was shared widely on social media.

The trial judge, Mr Justice Michael White, described it as “the most outrageous contempt of court” he had ever seen.