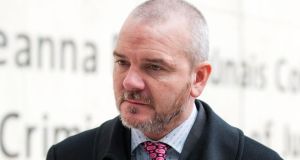 Former solicitor Thomas Byrne broke down as he thanked his past clients and alleged victims for the “fair evidence” they gave in his trial and for “not going to town on me”.

On his third day of cross-examination during his theft and fraud trial, Mr Byrne agreed with Remy Farrell SC, prosecuting, that it was “a striking feature” of his evidence that he “spoke with genuine affection” for his former clients.

Mr Byrne said he could not comment on a suggestion from Mr Farrell that they seemed to have “a residual affection for you”, before starting to cry in the witness box.

“I was very much struck by the way all of my clients gave their evidence,” he said.

Mr Byrne refused to accept a suggestion that these people had all turned on him and hung him out to dry. “No, they gave evidence because they had to. None of them went to town on their evidence and they were very fair,” he replied.

Mr Byrne (47), Walkinstown Road, Crumlin, is accused of theft and fraud offences totalling €51.8 million. The charges allege he transferred clients’ homes into his name and then used them as collateral for property loans.

Mr Byrne did not accept a suggestion from Mr Farrell that on his account, each of his clients had “independently of each other”come up with a scam of going to the Law Society and telling it “a pack of lies” in order to get the deeds of transfer for their properties returned.

“Collectively what they have in common is that they were all caught in the crossfire when my practice closed. It is not a scam. I will refuse to say it, because that is not my opinion.

“I understand why they gave evidence that is contradicting to mine. I respect them deeply, notwithstanding that we are at variance. I will not suggest that they were involved in a scam.”

He said he had bought many properties since 2000 and those involved “always got paid” before he emphasised that it had always been his intention to pay his former clients.

“The only people who didn’t get paid are those before the court because my practice was shut down,” Mr Byrne said.

“It was musical chairs with you and they got caught when the music stopped,” Mr Farrell replied. He asked him why he was not angry that all these people were “swearing a hole through a bucket and trying to land him in jail”.

Mr Byrne said he had a lot to be angry about but had a kind of stoicism which might be unusual.

Mr Farrell told Mr Byrne that he was going to “give him an opportunity”. “Do you want to persist with your story that makes perjurers of all these people that you have regard for?”

Mr Byrne replied: “I deeply regret being here but the reality is that I got into the witness box to tell the truth and that is what I have been doing and I don’t intend to stop telling the truth. I can’t go further than that.”

He acknowledged that there was not “a single jot of paper, not a yellow Post-it” that documented what Mr Farrell termed “an extraordinary and unorthodox agreement” between him and his clients in relation to transferring their homes to him on the understanding that he would give them the agreed funds at a later date.

“This is very unfortunate, given where you are now,” Mr Farrell suggested. “Yes, extremely,” Mr Byrne replied.

The trial continues before Judge Patrick McCartan and a jury.