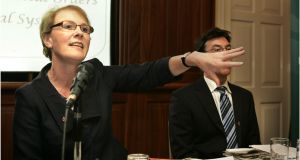 The director general of the Free Legal Advice Centres (Flac), Noeline Blackwell, is to leave her post at the end of February, the charity has announced. Photograph: Dara Mac Dónaill/The Irish Times.

The director general of the Free Legal Advice Centres (Flac), Noeline Blackwell, is to leave her post at the end of February, the charity has announced.

Ms Blackwell is to become chief executive of the Dublin Rape Crisis Centre.

The solicitor has served 10 years as head of Flac, an non-governmental organisation that offers free legal information and campaigns on legal issues.

She is also a trustee of Front Line, the international foundation for human rights defenders and a vice-president of the International Federation for Human Rights.

Ms Blackwell also sits on the board of the Immigrant Council of Ireland and the Citizen’s Information Board. She is an adjunct professor at Dublin City University’s school of law and government.

Flac chairman Peter Ward SC said Ms Blackwell made “a deeply significant and lasting contribution” to the development of the organisation and “more widely to the promotion of equal access to justice in Ireland”.

“During her 10 years as director general, she has helped Flac bring a spotlight on the legal issues impacting on the poorest and most marginalised people in Irish society,” he said.

He said her time coincided with Ireland’s plunge into deep recession and she ensured that Flac “responded to the legal needs of so many in Irish society who faced unemployment, unsustainable debt, inadequate social welfare provision and poverty”.

Mr Ward described Ms Blackwell as a “committed and tireless advocate” on behalf of people. He said she managed staff at head office while also supporting the expansion of voluntary advice services throughout the country.

“We wish to thank Noeline for her outstanding work and commitment to our organisation and wish her every success and fulfilment in the new challenge she is now undertaking,” he said.