Goldenbridge cemetery to reopen as part of culture festival 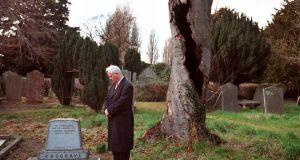 Former taoiseach John Bruton stands at the grave of WT Cosgrave, who was buried in Goldenbridge cemetery in 1965. Photograph: Dara Mac Dónaill

The reopening of historic Goldenbridge cemetery will be among the highlights of a new culture festival highlighting the postal district of Dublin 8 next month.

Originally opened in 1828, and modelled on Père Lachaise in Paris, Goldenbridge was among the first official Catholic graveyards in Dublin since the Penal Laws. It was closed later that century, except for occasional burials, including that of the politician WT Cosgrave in 1965.

The cemetery was overgrown for some years and Cosgrave’s was among a number of graves vandalised there in 2014 but since repaired.

Its reopening to the general public will be marked by a concert during the Culture Date with Dublin 8 festival on May 13th and 14th, with performers including the local St James’s Brass Band, which itself has a history stretching back to at least the early 1800s.

Although most of its residents are south of the Liffey, Dublin 8 is unusual in being one of only two postal districts to cross the river, north of which it also includes the Phoenix Park.

The May festival is designed to promote the many historical and cultural landmarks in the area, including Kilmainham Jail, the War Memorial Gardens at Islandbridge, the Irish Museum of Modern Art, and two cathedrals: St Patrick’s and Christ Church.

The event was formally launched on Wednesday in Richmond Barracks, which will also host a touring installation from Belgium’s In Flanders Fields museum, commemorating the Irish dead of the first World War.

All tours and shows during the festival are free, although in some cases subject to booking. The full programme is at culturedatewithdublin8.ie.