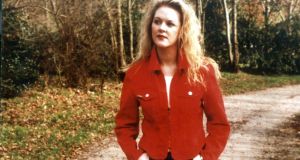 It is exactly 20 years on Tuesday since Fiona Pender disappeared. 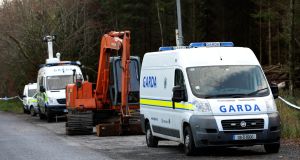 Gardaí search for the remains of Fiona Pender, having cleared a strip of woodland at the edge of a remote forest in the Slieve Bloom mountains in Co Laois, December 2014. File photograph: Eric Luke/The Irish Times 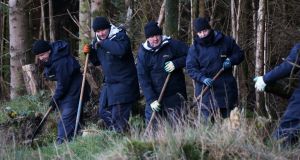 Gardaí search woodland off Green Road in the townsland of Rosenallis, Co Laois, during a renewed search for the remains of Fiona Pender, December 2014. File photograph: Colin Keegan/Collins Dublin

Fiona Pender would have turned 45 this year. The Co Offaly woman vanished in 1996, a time when Mary Robinson was president, divorce had just been introduced in Ireland and swimmer Michelle Smith had swept up four medals at the Atlanta Olympics.

Two decades later, Ms Pender’s name and image remain highly recognisable. Along with Philip Cairns, Jo Jo Dollard, Fiona Sinnott, Annie McCarrick and a small number of others, her disappearance remains one of the highest-profile missing-persons cases investigated by gardaí.

Tomorrow marks 20 years since Ms Pender was last seen alive. In that time her family has faced more false dawns than most of those who have seen relatives disappear, but they are still waiting for answers about what happened.

The child Ms Pender was pregnant with at the time of her disappearance would now be 19, which is a further source of anguish for Fiona’s parents, Josephine and Seán.

Ms Pender’s case and the disappearance of other young women in the Leinster area would give rise to Operation Trace, which examined any possible links between the cases. None was found.

However, Ms Pender’s disappearance is unlike many of the others in that the Garda has had a chief suspect from the outset; a man known to her and who also lived in the midlands at the time.

Working on the theory that he was the killer, gardaí have arrested several people and have used information supplied by members of the public to search and excavate lands.

Every arrest – five of them – and every search has brought new hope for the family that the mystery may be about to be unlocked and perhaps their daughter’s remains returned to them.

But every lead has drawn a blank.

In recent times, when a woman abroad supplied information about an Irish man she had grown close to, suggesting he had harmed Fiona and knew where her remains were, the family’s hopes were raised again.

However, despite the witness travelling to Ireland to assist the Garda and even take them to locations that she believed had a special significance for him, still no trace of Fiona was found.

The man she identified knew Ms Pender before he emigrated. Gardaí believe he has a drink problem and has shown a propensity for violence, including the physical and verbal abuse of women.

However, while gardaí believe he is a credible suspect, no physical evidence linking the man to Ms Pender’s disappearance has emerged, and gardaí are also no closer to finding her remains.

Josephine Pender has suffered ill health of late and when she spoke briefly to The Irish Times in recent days she said she would speak publicly this week if she felt able.