Fingleton ‘should have been dismissed’ from Irish Nationwide in 2007 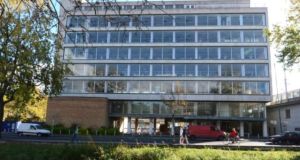 The special liquidators of Irish Bank Resolution Corporation have told the Commercial Court former Irish Nationwide Building Society chairman Michael Fingleton should not have been paid a € 1 million performance bonus prior to his departure but should instead have been summarily dismissed.

Had the true picture of the society’s affairs been known, Mr Fingleton should have been summarily dismissed no later than 2007, IBRC claims.

Mr Justice Peter Kelly today agreed to fast-track separate proceedings by the special liquidators against Mr Fingleton and four other former directors in the Commercial Court.

While no sum in specified in the proceedings against Mr Fingleton or the ex-directors, the judge noted the claim will run into tens of millions of euro.

The case relates to the conduct of some 20 transactions which had been subject to a forensic examination, the judge heard. The statement of claim in the case extends to 80 pages, it was stated.

An investigation into how affairs of the INBS were conducted under the stewardship of Mr Fingleton had taken more than three years due to factors including he had left behind “astonishingly” few documents, the court also heard.

That meant the affairs of INBS had to be effectively reconstructed, said Maurice Collins SC, for IBRC.

The judge noted Mr Fingleton was involved with the society from 1971, initially as a director and later as chief executive, until 2009.

Bill Shipsey SC, for Mr Fingleton, neither consented nor objected to transfer but said he was concerned Mr Fingleton was not covered by insurance within the meaning of a policy relating to directors and officers of the society.

It also seemed Mr Fingleton was being blamed for effectively allowing the board give him too much power, counsel added. Mr Collins said the issue of insurance had no relevance to the case.

The four others being sued are former chairman Michael Walsh, and former directors Terence Cooney, Stan Purcell and David Brophy.

Lawyers for those defendants argued they were in a very different position from Mr Fingleton and the cases against them should be dealt with separately on grounds including Mr Fingleton had significant knowledge of the transactions at issue but they were non-executive directors who had not.

Mr Justice Kelly noted the claim against the four included allegations they had wrongly delegated authority to Mr Fingleton to deal with a range of transactions. He said they were entitled to time to examine documents and also noted some intended to seek security for costs of the case against IBRC.

He was satisfied the state of knowledge of the four was substantially less than that of Mr Fingleton, the judge said.

The proceedings relate to matters dating back to 2006 when the men were directors of Irish Nationwide and centre on actions allegedly taken by Mr Fingleton and the board’s oversight of his role and management of the lender.

INBS was nationalised in 2010 and later merged with Anglo Irish Bank into IBRC.

It emerged in court that the building society paid some €90,000 for pension advice and arrangements for Mr Fingleton and tens of thousands of euro to meet costs of his meals and accommodation in top restaurants and hotels here and abroad.

The special liquidators of IBRC claim some of the expenses were not appropriately incurred.

According to court documents setting out various expense claims for Mr Fingleton from 2002, the society paid for entertainment and presents provided to some well-known business people, including €3,255 claimed for a present for Michael Smurfit from a liquor store in St Bartlelemy in the Caribbean and a €1,000 Brown Thomas gift token for a daughter of developer Gerry Gannon.

It paid €6,000 for a Gucci watch bought at auction in 2006 by Mr Fingleton and later re-auctioned with the funds given to the charity, the Jack & Jill Foundation. Some €4,525 was also claimed for a New York jeweller, Maurice Columbus and there was a claim of €8,000 for a Caribbean jeweller.

Some €4,000 was claimed for entertainment for developers Sean Mulryan and Louis Scully, solicitor Paul Wallace and others at Annabel’s Private Club, Berkeley Square, London, while some €7,000 was paid for a two-night stay in Dublin’s Westbury Hotel in February 2009 for Mr Fingleton and others described in the documents as “O’Hare, Parker, Empson, Dawson and McCollum”.

Mr Fingleton also claimed expenses for membership of the K Club, trips with Private Chauffeurs Ireland, rounds of golf, other medical treatment, food and drink levies and for sums in cash.

Credit card expenses included for some €6,754 for the Hotel Marbella Club golf resort while the society also funded a €50 return flight from Dublin to London for Arthur French.