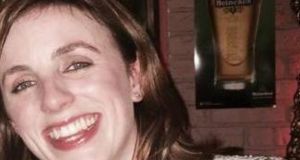 The father of a seven-month-old baby boy was unaware his child lay dead in their Co Dublin home and that his partner had left the property and died tragically until gardaí called to the house early on Thursday to raise the alarm.

The results of the postmortem showed the baby died of asphyxiation. However, gardaí have yet to determine if foul play was a factor. The death of the boy’s mother was being treated as a “tragedy” by investigators.

Garda sources said even if the postmortem determined the boy had been unlawfully killed they were not looking for anyone else in connection with his death.

The family - Nicola Keane (34) and her partner Darren Coleman - is originally Ballina, Co Mayo, but had been living in Lucan for some time. Ms Keane worked as a nurse in the children’s hospital in Crumlin while Mr Coleman is a teacher.

The first indication that anything untoward had happened was at about 3.45am on Thursday when gardaí were alerted to a woman acting suspiciously on the M50 near the toll plaza after she got out of her car.

When they went to investigate they found the woman’s body on Lower Road, Strawberry Beds, Lucan, Co Dublin. After checking the registration of her car, gardaí established it was registered to an address in the Lucan area.

When gardaí called to the property the woman’s partner was asleep and was unaware anything had happened. However, when the baby was checked in the house he was found unresponsive and was pronounced dead at the scene.

There were no obvious signs of injury or violence to the baby. His remains were removed to Crumlin Hospital and his mother’s remains were taken to the City Morgue for a postmortem .

“At this stage investigating gardaí are treating these incidents as a family tragedy and are not currently seeking anyone else in connection with the deaths,” the Garda said in a statement. It added that the family of the deceased woman and child had appealed for privacy “at this sad time”.

While an investigation was being conducted by Lucan gardaí, they do not believe any other person was involved in the deaths .