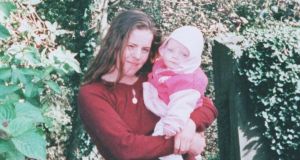 Fiona Sinnott, pictured here with her daughter Emma, was aged 19 when she went missing in February 1998. Photograph: Family handout

The family of Wexford woman Fiona Sinnott, who has been missing and presumed dead for 17 years, hopes to start a new search for her body in the coming weeks after receiving “reliable” information.

Fiona Sinnott, the youngest of five siblings, was aged 19 when she went missing in February 1998.

A single mother, she had recently separated from her boyfriend and was living with her baby daughter in a rented cottage in Ballycushlane, Co Wexford.

Fiona was last seen in public at Butler’s pub in Broadway near Rosslare, Co Wexford.

Fiona’s cousin, Marie Sinnott, said the family organised a private search and dig from March to May this year after receiving new information on the disappearance.

“We’re not going to stop. We have to be her voice. We’ll do whatever it takes to bring Fiona home,” she said.

Marie Sinnott said that during the search earlier this year, two local sources had given “very reliable” information on two more sites.

She said there was a “bigger significance” to the third site, and the family was working with gardaí.

Ms Sinnott said the family was hopeful the next search would be carried out in coming weeks, once the go-ahead came from Operation Trace.

“It’s a waiting game. It’s really, really hard. We just want to go get her,” she said.

No connection between the cases was found and none of the women’s remains have been discovered.

Marie Sinnott said the family pooled their resources to push ahead with the recent dig this year after new information.

“We were tired of waiting and we decided to do something,” she said.

“We had three diggers in total. The third one was donated.”

He said the dogs were trained to find human remains, forensic items and bodily fluids.

Ms Sinnott said the family believed they had found hair around a sewage tank in the search area, and had sent it to gardaí for examination.

This had been tested by gardaí and ruled out of the investigation, she added.

Ms Sinnott said the family had strong hope they would find Fiona with the help of the latest information, but would continue searching for as long as it took.

A Garda spokesman said they were involved in an ongoing investigation into the disappearance.

“A family liaison officer has been appointed and liaises directly with the family,” he said.

He said any information that came into the possession of gardaí was immediately acted upon.

Meanwhile, in a separate case, gardaí are still searching in Dundalk for the remains of Ciara Breen in marshland in Dundalk, Co Louth.

Gardaí said the search, which began on Tuesday, could continue for a number of weeks.