Extradition to Poland case comes back before judge 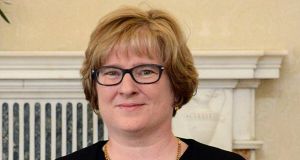 Ms Justice Aileen Donnelly is to ask the ECJ if it is correct she should consider the deterioration in the independence of the Polish judiciary in her decision. Photograph: Dave Meehan

The extradition case that has raised fundamental questions about the rule of law in Poland, and how it affects the European Arrest Warrant (EAW) system, comes back before Ms Justice Aileen Donnelly today.

The judge is to address some questions to the European Court of Justice (ECJ) in Luxembourg, which oversees the implementation of European Union law, and parties to the case will get an opportunity to suggest how these should be worded.

The case involves a request from Poland for the extradition of Artur Celmer for alleged drug trafficking. Mr Celmer is basing his objection on the deterioration of the rule of law in Poland since a more right-wing government came to power. These changes are already causing a political crisis in the EU and the ruling by Ms Justice Donnelly brings, for the first time, the Luxembourg-based ECJ full square into that crisis.

Ms Justice Donnelly is to ask the ECJ if it is correct that she should consider the general issue of the deterioration in the independence of the Polish judiciary, when considering the request for Mr Celmer’s extradition under the European system, which is based on mutual trust and recognition that has, up to now, been presumed to exist between EU jurisdictions.

In narrow terms, if the ECJ rules that the deterioration in the quality of the Polish legal system is a relevant factor to Mr Celmer’s extradition, then the Irish judge will go on to decide on whether she should sanction it.

Such a ruling by the ECJ could have enormous implications for how Poland is treated not just within the EAW system, but more generally within the EU.

In her ruling, Ms Justice Donnelly noted the submissions by the Minister for Justice, who acknowledged the right of the court to consider what has happened in Poland, but also said that there is no evidence that Mr Celmer is going to suffer a breach of his rights.

The judge summarised the extraordinary developments in Poland’s legal system since the Law and Justice Party came to power in 2015. These include a practice by the Warsaw government not to publish judgments of the constitional court, which would otherwise make some of what it is doing illegal. In Poland, judgments do not become law until they are published in an official journal.

Ms Justice Donnelly noted that some of the changes in Poland might, on their own, “not self-evidently appear to violate the rule of law” and then went on to consider the issue of the changed judicial appointments process in Poland, where a new body dominated by political appointees will be involved.

“Certain Polish legislative changes might lead to a result not too far different from the position in this jurisdiction,” she noted. Here the Government, urged by Minister for Transport Shane Ross, is to change the way judicial appointments are made, which involves a new body with a lay chair and a minority of judge members.

Ms Justice Donnelly quoted the Council of Europe’s view that “the body selecting judges should be independent of the executive and legislative powers and at least half the members of the body should be judges chosen by their peers”.

Where, as is the case here, the Constitution states it is the Government that appoints judges then, the council urges “an independent and competent authority drawn in substantial part from the judiciary” should be able to make recommendations.

Ms Justice Donnelly, however, did not say that Irish judicial independence was heading down a Polish slope.

The “fact that a particular change might be acceptable in Ireland is not conclusive or even necessarily relevant to whether the rule of law has been damaged in Poland” because the changes in Poland come in a context where there is “a concerted legislative package to politicise the judiciary and to take away its independence”.