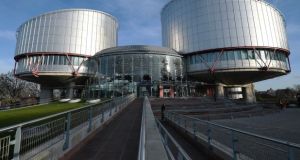 The decisions in relation to the three Irish women are final, the court said. File photograph: Frederick Florin/AFP/Getty

Three Irish women who took a case about a controversial surgical procedure to the European Court of Human Rights have been told the court has unanimously declared the applications inadmissible.

The decisions are final, the court said.

The women were given symphysiotomies in advance of or during labour in the 1960s in three different Irish hospitals.

A symphysiotomy is a now outdated surgical procedure in which the cartilage of the pubic symphysis is divided to widen the pelvis allowing childbirth when there is a mechanical problem.

The three women said they were not informed about the procedure and did not give their full and informed consent. They also claimed that they suffered physical and psychological trauma as a result of the procedure.

The women’s cases were among 10 applications by women who had undergone the procedure in different Irish maternity hospitals in the 1960s and 1970s.

The women said that the use of the procedure had not been the subject of domestic investigation that was compliant with the European Convention on Human Rights, and that, in addition, they had been unable to fully litigate their claim at the level of Irish domestic law.

One woman (KO’S) also complained that in allowing symphysiotomies to take place, the State had failed in its obligation to protect women from inhuman and degrading treatment.

In that case the court found the complaint to be inadmissible as the woman had failed to exhaust domestic remedies.

In the other two cases (LF and WM) it found the women’s complaints to be manifestly ill-founded, while also indicating that a question regarding the exhaustion of domestic remedies also arose.

The court expressed doubt about whether any duty on Ireland to investigate what had happened to women who received symphysiotomies had arisen on the facts of the three cases, but noted that Ireland had not remained inactive in the face of the “considerable controversy” surrounding the use of symphysiotomies in its maternity hospitals.

In addition to the possibility of civil proceedings, there had been an independent investigation, an ex gratia payment scheme had been put in place, which enabled all the women who had undergone a symphysiotomy to obtain an award of compensation, and the provision of access, free of charge, to healthcare and individual pathways of care had also been provided.

In the court’s view these factors had sufficed to meet any obligation the State might have been under to provide redress.

Owing to these factors, the court considered the complaint from LF and WM to be “manifestly ill-founded” since in its view there had been no failure to provide the applicants with access to effective proceedings allowing them to claim compensation.

It is estimated that up to 1,500 Irish women had the procedure performed on them.

In 2012, a draft report on the controversial procedure found that it had continued to be carried out at Our Lady of Lourdes Hospital, Drogheda, Co Louth almost 20 years after it had been phased out in other Irish hospitals.

The Strasbourg court noted that the draft report, by Prof Oonagh Walsh, found that in the period after 1940, symphysiotomy in Ireland was considered a procedure which appeared to offer the possibility of safe repeat deliveries and that this had to be considered in a context in which multiple births were the norm, artificial contraception and sterilisation were illegal as well as “ethically unacceptable”, and repeat caesarean sections were believed to carry great dangers.

In 2014 the minister for health announced the establishment of an ex-gratia payment scheme offering compensation to women who had undergone a surgical symphysiotomy in any hospital in Ireland between 1940 and 1990. The awards ranged from €50,000 to €150,000.

None of the three applicants to the European Court of Human Rights applied to the ex-gratia payment scheme, as they all believed that there was no possibility of any acknowledgement of a breach of their rights, and because of concerns as to the size of the awards available, the court said.

In a 2016 report by Judge Maureen Harding Clarke, who had overseen the ex-gratia scheme, set out the premise for it, “namely the widespread assumption that the symphysiotomy was a surgical procedure which as a matter of certainty created life-long suffering was unsupported by evidence”, the Strasbourg court said.

One of the applicants tried to sue through the Irish courts but the High Court ruled that at the relevant time the procedure, which had been performed two weeks in advance of labour after it had been established that a vaginal delivery would have been impossible, had been a reasonable though limited option.

An appeal to the Supreme court was not successful. After that the two other applicants to the Strasbourg court withdrew the cases they had pending in Ireland.

An earlier case taken in Ireland, by a woman who the procedure was carried out on after she’d received a caesarean, was successful and led to a €325,000 award.