Dundon trial for murder put back to Friday 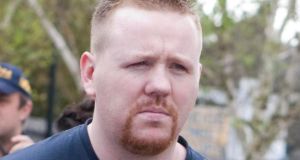 John Dundon: on trial for the murder of Shane Geoghegan

A wheelchair-bound John Dundon appeared in a state of undress before the Special Criminal Court today to hear that his trial for the murder of Garryowen rugby player Shane Geoghegan has been adjourned until Friday.

The non-jury court ruled that the trial of the 30-year-old, who appeared wearing only a pair of dark-coloured shorts, should not proceed until a defence application to have the trial adjourned comes before the Supreme Court.

Asked by presiding judge Mr Justice Paul Butler if he had anything to say about his client’s “state of undress”, counsel for the accused man Martin O’Rourke SC said that Dundon was without his own clothes having been discharged from hospital last night and returned to a cell in Portlaoise Prison other than his own.

Mr O’Rourke said that his client was not afforded an opportunity to obtain his own clothes and had refused to wear prison clothes made available to him by prison officers.

Counsel said that his client had asked that his own clothes be made available to him for the purposes of his court appearance.

Mr Justice Butler said the court would not “micro-manage” every matter, telling Mr O’Rourke: “If your client is not going to appear appropriately dressed in court then he will be absent from court”.

Mr O’Rourke said there were currently proceedings before the Supreme Court as the defence had written to Chief Justice Susan Denham for an expedited hearing on the decision of the Special Criminal Court not to grant an adjournment in the case.

Dundon’s defence team had sought an adjournment of the matter until 2014 in the interests of a fair trial, after they received thousands of pages of what was described as “thrown together” investigative material.

The Special Criminal Court refused the adjournment after finding it had to balance the potential danger to the life of the proposed chief prosecution witness against the danger of Dundon not receiving a fair trial.

A High Court bid to have the trial adjourned was rejected last Friday.

Mr O’Rourke asked the court for an adjournment in the matter to allow the Supreme Court consider the case and said that the defence also intended to bring an application to have the trial heard before a differently constituted court.

He said the trial court was composed of the same three judges who, in a previous trial, ruled that the proposed chief prosecution witness in the forthcoming murder trial was a “credible and reliable” witness.

Counsel for the State, Mr Tom O’Connell SC, told the court that he had taken instructions from the Director of Public Prosecutions not to consent to any adjournment in the case as the court had already heard and ruled on the disclosure issue and there had been a “thorough analysis” of this decision.

Mr Justice Butler said that although the court was “very conscious” that it had previously refused an adjournment due to the potential danger to the life of the proposed chief prosecution witness, the defence had a right to challenge the court’s ruling.

He said the court would adjourn the matter until Friday as the accused man was now going to the Supreme Court and should be given an opportunity to “get to the door of the court”.

John Dundon (29), with a last address at Hyde Road, Limerick, was due to stand trial this morning for the murder of 28-year-old Shane Geoghegan at Clonmore, Kilteragh, Dooradoyle, Limerick, on November 9th, 2008.

The case was brought before the non-jury Special Criminal Court in August last year as the Director of Public Prosecutions certified that the ordinary courts were inadequate to secure the administration of justice.

The trial is expected to last three to four weeks.