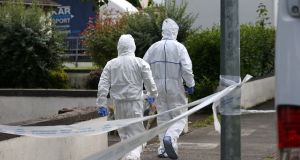 Garda forensic officers on Whitechapel Road in Dublin 15 on Sunday where the elderly man was killed. Photograph: Collins 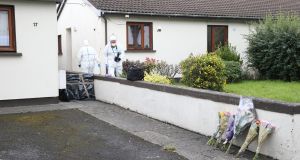 Flowers are left near the location where pensioner Peter McDonald (77) was killed on Saturday. Photograph: Collins

An elderly man was stabbed to death in Clonsilla, north Dublin on Saturday morning after confronting another local man who had been acting erratically, gardaí believe.

The victim, Peter McDonald (77), was attacked with a machete-type weapon outside his home on Whitechapel Road.

His attacker, who lived nearby, then barricaded himself in another house for six hours before specialist gardaí Tasered and arrested him.

Mr McDonald lived on his own on the quiet residential road in Dublin 15. Gardaí had received reports of the suspect, who is aged in his 40s, acting strangely in the area in the days before the attack.

Gardaí believe just before 6am on Saturday, Mr McDonald noticed the man interfering with a car in front of his house and went out to ask what he was doing.

The man then shouted at Mr McDonald before attacking him with a long bladed weapon.

Mr McDonald suffered “catastrophic” injuries, a source said, and died at the scene in his front garden, despite the efforts of a local person and an ambulance unit.

The attacker ran to another house nearby, believed to be his own home, which was quickly surrounded by gardaí. A Garda Armed Support Unit, under the direction of the Special Tactics and Operations Command was also called in.

Negotiators made contact with the man. They were satisfied there was no one else in the house but concerned the man could self-harm.

Gardaí consulted with people who knew the man who told them he had mental health issues.

The Garda also issued a “media blackout” request, asking the press to refrain from reporting on the incident until it was resolved, in case this aggravated the situation.

At around 11am the man stopped communicating with gardaí. After almost an hour a decision was made to “resolve” the incident using less-than-lethal weapons.

Officers moved into the house behind bullet-proof shields before firing a Taser at the man and temporarily disabling him.

He was arrested and brought to Blanchardstown Garda station where he remains. He can be questioned for up to 24 hours before being charged or released. It is understood he has been seen by a doctor.

“All units involved in this incident worked closely under Garda Strategic and Operational Commanders with the strategic intention to contain the incident, preserving life and bring the incident to a peaceful conclusion,” the Garda said in a statement.

Anyone with information on the incident is asked to contact Blanchardstown Garda station on 01 666 7000 or the Garda Confidential Line on 1800 666 111.

“There has never been any trouble in the area. People are living there for a long, long time.”

He said many of the residents are older people and “everyone knows each other.”

“The old folks have been through enough with coronavirus. This will be devastating for them.”

The incident was the fifth major barricade incident involving gardaí this year and the first involving a fatality.

There were only five such incidents in the previous three years combined.