Dublin Jimmy: ‘He spent a long time throwing his weight around this area’

Even after his death, locals in Ballyconnell only talk anonymously about Cyril McGuinness 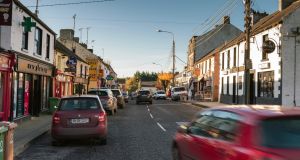 There may be armed Garda vans patrolling the streets of Ballyconnell, but people are still afraid to say too much about Cyril McGuinness. Photograph: Ronan McGrade/Pacemaker Press

Cyril McGuinness, also known as “Dublin Jimmy”, may be dead and there may be armed Garda vans patrolling the streets of Ballyconnell, but people are still afraid to say too much about him.

The stories when they do come, are told only anonymously.

“He spent a long time throwing his weight around this area,” said one man in Ballyconnell, who declined to be named. “I kept well away from him. I don’t know a thing about him.”

Most other locals are silent. But a few people tell the story of a man having an apparently cordial pint with McGuinness in a Ballyconnell pub who got a shock after he got back from a trip to the bathroom.

“He had thrown the keys of his van on the counter and when he came out they were gone, the van was gone, and Dublin Jimmy was gone,” said one man. “He did get a text message saying he would get the van back when he paid back whatever Dublin Jimmy believed he owed him.”

Another local said McGuinness drove the van around for a month “just to rub his nose in it”.

He recalled the late McGuinness as being very visible in the pubs around Ballyconnell and around the Cavan/Fermanagh border and of often deciding he did not fancy paying for his own drink. “He’d go into a pub and light a cigarette and nobody would dare challenge him. And he would order a pint and he might nominate somebody else to pay for it and pay for it they would.”

McGuinness, believed to have been one of the leaders of the gang suspected of carrying out arson attacks and other acts of violence on the former Quinn Group executives and properties, died of a suspected heart attack during a police raid in England last week.

Local people believe that while he may have been the boss of the criminal gang, McGuinness was not actually present when the attacks against Quinn Industrial Holdings executive took place.

Rumour has it that on the night that Kevin Lunney was abducted, tortured and left for dead in September, McGuinness had checked himself into a local hospital. In the course of another notorious incident, he is believed to have been sitting outside a Co Cavan Garda station.

“If ever he appeared in Cavan District Court, he always stood at the back of the courtroom and glared at gardaí or indeed the judge,” recalled someone who witnessed such scenes.

“He exuded menace. He never sat, always stood at the back and of course witnesses never showed up to give evidence against him. When you walked into the court, you’d know immediately if he was there from the atmosphere .”

Ballyconnell’s proximity to the Border suited McGuinness — who lived in a bungalow between the town and Derrylin – not least in his efforts to evade gardaí.

He is reported to have taunted one garda who followed him in a patrol car and who had to watch as McGuinness crossed the Border before jumping out of his car and goading the officer to follow him into the North.

Asked whether he felt relieved that McGuinness is no longer on the scene, QIH director John McCartin echoed those who wonder if the criminal organisation he was involved with is still intact.

No idea who he was

McCartin said he came face to face with the criminal twice that he knows of, although the first time he had no idea who he was. The second time a few years ago, he “barely” recognised him and only because he had seen his photograph on the front page of the Sunday World .

“I was putting the bins out and suddenly saw this Merc beside me and he was in it,” said McCartin. “The Merc pulled off with no words exchanged.”

There had been an earlier encounter when McCartin, an accomplished musician, was playing guitar in a Cavan pub when one of the patrons started abusing him, raucously demanding that he play certain songs. “I played the first one but then I just decided to ignore him, ” he recalls.

When the noisy customer left, he was told that he was lucky he had got off so lightly after refusing to do Dublin Jimmy’s bidding.

McCartin said he does not believe that the shadow of violence has passed. “Just because a central figure involved in crime in the entire region is now out of the equation we would be very foolish to assume that someone will not step into the breach,” he says.

“From the point of view of the attacks on QIH we would be wise to presume that the objectives of whoever procured and resourced the crimes against us, remains unchanged. Until that person is brought to heel, we will be under threat.”