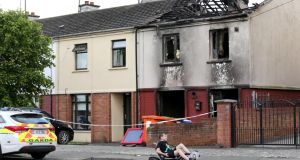 A house in Drogheda’s Moneymore estate was petrol-bombed in relation to the Drogheda feud. Photograph: Crispin Rodwell

The latest gun and arson attacks in the Drogheda gangland feud give a firm impression that the violence will run on and on until key members of the rival groups are taken out of circulation.

In recent months senior Garda management, including Commissioner Drew Harris, have insisted that everything possible was being done to stop the violence and bring those responsible to justice.

More resources have been assigned to the Louth Garda division in direct response to the feud, and armed units have been drafted in to patrol the town’s streets. Garda checkpoints aimed at disrupting the movements of gang members have also been regularly put in place.

However, despite the efforts to thwart the violence being ramped up and the national media’s spotlight having been shone on some of the key players, the feud continues.

A clear pattern is also starting to emerge to the violence.

One of the drug gangs involved strikes against a member of the other faction, and then within hours a revenge attack has been planned and executed.

The desire to strike back immediately, irrespective of gardaí flooding into an area because of an earlier incident, has been a feature of some previous Irish feuds, with disputes in Crumlin-Drimnagh in Dublin and Limerick the two clearest examples.

These were feuds fuelled by hatred rather than following any drugs turf war dynamic. Those involved saw their earnings from drugs reduced because they were under so much pressure from the Garda. Yet they still felt compelled to fight on. More than a dozen people died in both feuds – unprecedented figures when compared with anything that came before.

The violence in Limerick was brought to a stop only when the leaders of the McCarthy-Dundon gang were jailed. The Crumlin-Drimnagh feud stopped after Freddy Thompson’s faction effectively wiped out its rivals.

Thompson and his associates then morphed into the Irish wing of the international Kinahan cartel. It is now embroiled in another gun war – the Kinahan-Hutch feud. Once again it is a dispute driven by hatred rather than a desire to win out over a rival drug-dealing group for financial reasons.

And because it is a personal matter, the body count has risen to 18 and easily surpassed any previous Irish feuds.

Nobody has been killed in the Drogheda violence so far. But at least three men have been wounded in gun attacks and left with life-changing injuries. In total, there have been more than 70 feud incidents since the first victim was shot last July. These include beatings, shootings, petrol bombings and other forms of arson, and incidents in which explosive devices were planted.

The worry for the Garda is that bursts of violence like Thursday night’s – which saw a gang figure ambushed by armed rivals and houses burned out in revenge just hours later – continue despite the intense focus of the force on the gangs. This is now following a pattern of the worst Irish gangland violence that has gone before.