Tyrone farmer on trial for father’s death by dangerous driving 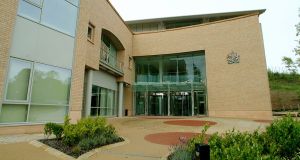 A Tyrone farmer is on trial at Dungannon Crown Court accused of causing the death by dangerous driving of his 69-year-old father.

In what was described as a “particularly tragic case” in which only the “heartless” would have no sympathy, a Tyrone farmer on Thursday went on trial accused of causing the death by dangerous driving of his 69-year-old father.

The pensioner, Phelim Alexander Brady, suffered multiple injuries and died three years ago when a cattle lorry crashed into the rear of the tractor and trailer driven by his son Paul.

Sitting in the dock of Dungannon Crown Court, sometimes with his head buried in his hands, Paul Alexander Brady listened as the prosecution claimed he was guilty because he allowed his father to travel on the draw-bar between the tractor and trailer.

The 46-year-old from Caledon, is also accused of causing his father’s “untimely death” by driving while disqualified and without insurance, on the Woodlough A4 dual carriageway road between Dungannon and Caledon.

In the dock beside him, also denying the death by dangerous driving charge, is 53-year-old lorry driver William Mark Murphy, from Ballyward in Co Down. As the trial was about to start, Mr Murphy pleaded guilty to causing Mr Brady’s death by careless driving, a plea which was not accepted by the prosecution.

In his opening to the jury of seven men and five women, Peter Irvine QC appealed to them to put aside any feelings of sympathy or prejudice, but admitted what they would hear was a “particularly tragic case, a case where you will have a heart of stone if you were not to have a sympathetic disposal to the facts”.

The prosecution lawyer Mr Irvine said that when later interviewed, Mr Brady told police that he had not wanted to drive the tractor, but agreed only after his father, who rode on the draw bar, asked him to help take cattle to the Dungannon market.

The court also heard that immediately after the accident he told police: “I told him he shouldn’t be on the draw bar.”

Turning to Mr Murphy, the lawyer said he told police that as he approached the tractor-trailer he slowed and was about to overtake it when he was forced to abandon the move by a speeding car overtaking him.

Mr Irvine claimed that Mr Murphy, whose speed was estimated to be around 56mph, had driven into the back of the trailer at “significant speed”.

The trial, expected to last until next week, continues on Friday.