Dog dies after being locked in a car outside Bloom festival 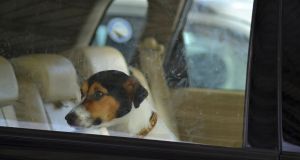 A file photograph of a dog in a car. Photograph: Getty Images

Gardaí are investigating the death of a dog after it was locked in a car in hot temperatures during Bloom festival last Friday.

Passers-by called gardaí about 2pm after they were worried about the dog, which was inside the vehicle with reportedly no water and the windows shut.

It is understood the dog was in the car more than three hours on a day where temperatures reached over 18 degrees at Phoenix Park in Dublin.

A Garda spokesman said the dog was brought to a vet but had to be put down.

“On a hot day you have to take responsibility for the animal in your care,” he said.

Gardaí in Blanchardstown are investigating the incident .

A person can be fined up to €5,000 and/or jailed for up to six months for neglect, abandonment or cruelty to animals under the Animal Health and Welfare Act 2013.

There is further provision for fines up to €250,000 and/or prison up to five years for more serious cases.

The Irish Society for the Prevention of Cruelty to Animals (ISPCA) said in a statement it is deeply saddened about the case.

“It did shock me that people could leave their dog in a car for an extended period. Thankfully it happens less and less. But it does happen,” he said.

“Nobody goes out leaving their dog in this situation like this thinking this will happen. I’m sure the owners are devastated. But people need to be aware leaving a dog in the car can possibly lead to a painful death for the dog.”

Mr Beazley said people should never leave their dog in the car.

“The car basically turns into an oven in the sunshine. Even in quite mild weather it can be very dangerous,” he said.

“Leaving a window ajar or parking in the shade doesn’t make much of a difference to the temperature in the car.”

Mr Beazley said dogs left in a vehicle could die from a combination of heat stroke and dehydration. “Even leaving a bowl of water in a hot car is going to have no beneficial effect,” he said. “The basic advice is never to leave your dog alone in the car full stop.”

Mr Beazley said if people have their dog travelling in the car during warm weather, they should have a sun blind for shade and always have water.

He said owners could also apply sun cream to their dog’s exposed areas.

“Don’t use human sun cream, it can be toxic for dogs. There are specific sun creams for dogs,” he said.