Reform required to improve handling of cases in Republic 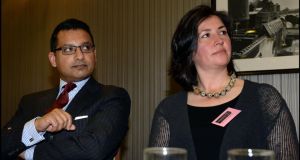 Asim A Sheikh and Jenny Bulbulia at the Voice Of A Child conference in the Ashling Hotel, Dublin. Photograph: Brenda Fitzsimons


“Some serious cultural change in a number of agencies” is needed to improve the handling of child sexual abuse cases in Ireland, a conference on childcare and the law has been told.

Barrister Úna Ní Raifeartaigh SC, who specialises in criminal law, said until changes are made “we are all complicit in a system which is itself capable of perpetrating further abuses on children”.

She said she had heard lawyers saying they would not put their own children through it. This was a terrible indictment of the system and numerous practical steps needed to be taken to improve the system.

Aspects of the system potentially harmful to children included “delays of several months at a time, while the file sits idle on someone’s desk”. These delays had the potential to “affect the quality of the evidence in a manner that does not apply in cases involving adult witnesses”, she said, and it was also better for a child to have the trial quickly so that he or she could move on with their lives.

She emphasised the importance of initial statements taken from children who make an allegation of child sexual abuse and said it required “unusual skills and training”.

She acknowledged some gardaí in recent years had received training to make them specialist interviewers, but it was too early to assess if the training was having the desired effect. Gardaí also needed to carry out a “thorough investigation” of a case and explore any possibility of corroborative evidence.

Ms Ní Raifeartaigh said the norm in child sexual abuse cases often seemed to be simply to take the child’s statement, statements from key relatives, to interview the accused some months later, and “leave it at that”. Issues may have been raised that suggest avenues of further inquiry “yet there was no further investigation”. She also questioned why it took several months from the taking of a child’s statement before an accused is interviewed.

“Child abuse cases should be treated as urgent . . . the casual loss of a few months is not defensible.”

Ms Ní Raifeartaigh also criticised delays at the office of the Director of Public Prosecutions and in the courts system and said there was a “serious need for a different system for fixing trial dates for child sexual abuse cases”, perhaps with a specialist list.

A time should also be scheduled for children giving evidence in court instead of having them “hanging around for a number of days”.

Also presenting a paper at the weekend conference, which was organised by La Touche Training and chaired by Mrs Justice Catherine McGuinness, consultant psychologist Dr Rosaleen McElvaney said the adversarial nature of the criminal justice process was unsuited to dealing with sensitive issues like child sexual abuse.

Dr McElvaney said despite some attempts at co-operation between the child protection system and the police services in Ireland, joint interviewing continued to be an aspiration rather than a reality.