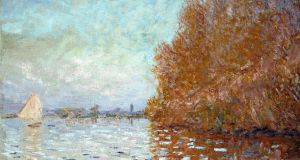 The gilt-framed painting, entitled Argenteuil Basin with a Single Sailboat, dates from about 1874

A tourist who witnessed a €10 million Claude Monet painting being damaged said he saw the accused man “lift his fist and put it through the painting”.

The gilt-framed painting, entitled Argenteuil Basin with a Single Sailboat, dates from about 1874 and is Ireland’s only work in public collection by the celebrated French impressionist.

Two tourists who travelled from New Zealand to give evidence told the jury at the Dublin Circuit Criminal Court they were standing next to the Monet painting when the incident took place.

‘Deliberate’
Michael Williams told Kerida Naidoo, prosecuting, that he felt the damage had been “quite deliberate”.

“Out of the side of my eye I saw this man lift his fist and put it through the painting. To me, it was clearly what he wanted to do,” he said.

“He said to me he was feeling faint. I grabbed him straight after the event and he had his excuse ready to go. I couldn’t help but feel that it was planned,” he said.

Mr Williams said he manoeuvred the accused into the middle of the room “so he couldn’t do any more damage.”

“I didn’t need to support him, he didn’t collapse to the floor. He sat down and stayed erect; he didn’t lean forward as a person would who was feeling faint,” said Mr Williams, who said he had worked as a flight attendant.

Mr Williams’s wife, Dr Toni Ashton, told the jury that Mr Shannon “seemed to appear out of nowhere”, and that she saw his fist “like a hammer”.

“He seemed to lunge at the painting with quite a lot of force in the body,” she said.

Dr Ashton said Mr Shannon seemed a little disoriented and “out of it” and that he kept looking at the ground.

She said the accused told them he had a heart condition and asked for some water.

Earlier, the jury saw CCTV footage of the incident, which was played at least eight times.

Sean Rainbird, director of the National Gallery of Ireland, said the Monet painting had been bequeathed to the gallery in 1924 from the collection of Edward Martin.

‘Great treasure’
He said it was “without doubt” a painting by Claude Monet, and was “obviously a great treasure of the collection”.

Mr Rainbird said the painting had an approximate value of €10 million, but added that this year several Monet paintings had sold for up to $40 million (€29.5 million).

The court also heard from conservator Elline Von Monschaw, who is leading the team repairing the painting.

“I presume there was quite a forceful impact on the painting, causing the fibres to break straight away rather than stretching and elongating and then breaking,” she explained.