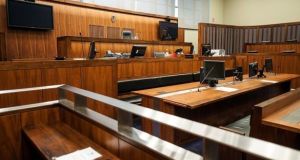 The youth, who wants to be a mechanic, was placed on supervised probation for nine months and banned from driving for four years.

A Dublin youth found guilty of dangerous driving in a graveyard and leading gardaí on a high-speed pursuit has been spared a jail sentence.

The then 17-year-old boy had denied the allegations and claimed he was travelling as a passenger in the car but he was found guilty following a hearing before Judge Brendan Toale at the Dublin Children’s Court in December.

Sentencing was adjourned until Thursday for a probation report to be prepared.

An order prohibiting identification of the accused, Dean Cullen, aged 18 and therefore now an adult, from Kilcarrig Crescent, Tallaght, in Dublin, was discontinued by Judge Toale on Thursday following an application by media outlets.

The youth, who wants to be a mechanic, was placed on supervised probation for nine months and banned from driving for four years.

The pursuit started at Bohernabreena Cemetery in south County Dublin at just before 4pm on November 15th, 2018, less than a month after he had been already disqualified from driving.

The car was driven alongside graves before it broke red lights, was driven on wrong sides of the road, mounted a kerb and two green areas before it was abandoned while it was still moving.

Pleading for leniency, defence solicitor Brian Keenan asked Judge Toale to note the pre-sentence report was positive and it said the teen was suitable for probation supervision.

He was engaging with educational service and wanted to complete the Leaving Certificate. The youth now had insight into how cannabis use had impacted negatively on his behaviour and he was apologetic, the solicitor said.

He had not continued to come to Garda attention. Addressing education and training was condition of the probation bond.

Detective Garda David Connolly told the court he responded to a report of a car driving dangerously at the cemetery.

His attention was drawn to a small silver car in the graveyard car park.

It began speeding hard on graves and accelerating hard, and drove toward the patrol car but there was not enough room for two cars to pass on the narrow roadway, he told the court.

Detective Garda Connolly reversed and the silver vehicle approached at speed passing close by the unmarked car on his right hand side.

The wheels of the silver car would have been against the graves along the roadway, he said.

He recalled having a good look at the young man driving, and that he noticed there was a female front seat passenger in the car.

The silver car headed to the exit which had high walls on either side while the garda activated his lights and sirens. The car drove out of the cemetery at speed and turned right giving no chance for traffic coming from either direction, he said.

It broke a red light while there was heavy traffic and headed in the direction of the Tallaght by-pass “down the centre of the road”.

Other vehicles had to take “avoidance action”.

It overtook a stationary line of traffic and headed toward Jobstown, the court heard. It also drove out in front of a motorcycle, and forced other vehicles to take avoidance action on the N81 outbound. He could see the car was “skidding right and left, accelerating hard and braking hard”.

It broke another red light and drove on the wrong side of the road passing stationary traffic before it mounted a kerb at Cloonmore Park.

It started to rain as the car drove across a green where there was a man walking a dog and someone else using a quad bike.

The car drove between trees on the edge of the green and made its way to the Jobstown Road and back into an estate where it mounted another green.

It then drove toward Cloonmore Park and turned 90 degrees.

At that stage, the detective said, he momentarily lost sight of the car but he rounded a bend and saw in the centre of the road “still moving and there did not appear to be anyone in it”.

He said he saw the driver climb a garden wall and he went to ground. Garda Mark Cullen searched one of the gardens and arrested the accused. He claimed he immediately recognised him as the same person driving the car.

He did not know where the female passenger went.

In evidence the teen claimed he had been a passenger, another male was the driver and they had gone to the cemetery to visit a grave.

He was found guilty of dangerous driving and not having motor insurance or a licence.

He had five convictions for motoring offences including dangerous driving.

Following the hearing last month, the judge had acceded to request from the defence to allow temporary reporting restrictions preventing the naming of the youth who had reached adulthood by the time of his trial.

The order had been made under Section 45 of the Courts (Supplemental Provisions) Act 1961.

However, following an application from the media on Thursday it was discontinued. The media had cited a recent Court of Appeal judgement which found the piece of law cited by the defence could not be applied.