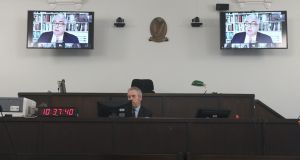 A general view of the Four Courts as Chief Justice Frank Clarke speaks during the first remote sitting of the Supreme Court on Monday. Photograph: Collins Courts.

The nine judges of the Supreme Court are concerned about holding physical hearings during the ongoing Covid-19 pandemic, Chief Justice Frank Clarke has said.

Speaking as the court conducted its first ever hearing using remote video technology on Monday, the Chief Justice said concerns included that if one member of the court contracted the virus, others could also become infected and the knock-on effect this could have on other sittings taking place.

During a case management hearing, he said remote sittings were likely to prove suitable for most if not all cases in appellate courts such as the Supreme Court and Court of Appeal, but that different considerations would apply in trial courts.

The Chief Justice and the various legal teams were based in their homes for the case management hearing, which concerned an appeal involving Friends of the Irish Environment (FIE) against the Government and various State parties, due for hearing on June 22nd.

FIE is appealing the High Court’s rejection of its claim that a Government plan for tackling climate change is flawed and inadequate.

The Supreme Court registrar, John Mahon, was based in court Number 29 of the Four Courts for the hearing. A court reporter was also present to address the constitutional requirement that justice be administered in public.

Eoin McCullough SC, for FIE, told the Chief Justice that the case involved a large amount of documents and his side was anxious to facilitate a remote hearing as much as possible.

Eileen Barrington SC, for the State, said she could not yet say whether the Office of Chief State Solicitor considered this appeal suitable for remote hearing and asked for more time to clarify the State’s position.

A review group within the office is examining a range of issues, including logistical issues, concerning remote hearings but, in the interim, the State side was happy to proceed on the assumption the appeal would be heard remotely, she said.

The Chief Justice said if there was a successful objection to a remote hearing of the case, the appeal may have to be postponed for quite some time. He said the State could outline its position in correspondence and fixed a further case management hearing for May 8th.

Earlier, the Chief Justice said he suspected the remote hearing would be the first of many in the coming weeks and months and he acknowledged the work of the Courts Service in putting this facility in place.

While other countries have started or announced the commencement of remote hearings in many cases, “they were coming from a significantly higher technology base than us”, he said.

He said remote hearings will be suitable for some types of proceedings in the High Court and a limited number of cases in the District and Circuit Courts.

Many urgent cases throughout the country have been handled by dedicated judges and staff often working in difficult conditions, particularly the District Court, he said.

Regarding the Supreme Court, he said a new practice direction last Thursday varied the existing practice direction for the duration of material restrictions during the Covid-19 pandemic. A default position of remote hearings is an important feature but others include a move to significant electronic lodgment and filing of documents.

While there are many document management systems available, some could be expensive and require experience to operate and he was anxious the basic system to be used in the Supreme Court should be easily accessible to all, while allowing parties who wish to use more sophisticated platforms to do so.

A mock trial last Friday was sufficiently successful to allow for a move to real remote hearings and guidance will be made available in that regard, he said. Affected parties will shortly be contacted about the possibility of cases being heard under the new procedures in the weeks commencing May 11th.

Later on Monday, the Court of Appeal conducted its first remote appeal hearing.