Man would receive €1.5m in damages ‘due to interest’, court hears 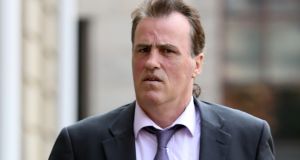 Martin McDonagh, who is engaged in a legal battle with the ‘Sunday World’ over a story which referred to him as a ‘Traveller drug king’. Photograph: Collins Courts

If a €900,000 damages award to a man by a jury which found that a newspaper had wrongly described him as a “Traveller drug king” is allowed to stand, it will have grown to €1.5 million due to accrued interest, the Supreme Court has heard.

The seven-judge court heard arguments on Wednesday about whether the libel case should be retried before a jury or whether the Supreme Court itself should assess damages.

This was among a number of reasons why the paper believed the case should go back to the High Court for retrial on all the issues in the case and not just on some of them, as Mr McDonagh’s side had argued, Mr McCullough said.

The Chief Justice, Ms Justice Susan Denham, said at the end of submissions on Wednesday that the court was reserving its decision.

During the hearing, in reply to questions from the judges, Mr McCullough said he believed the appropriate level of award in this case, in the context of proportionality to other defamation awards, was €75,000.

Declan Doyle SC, for Mr McDonagh, said the €900,000 figure should stand given a number of factors in this case, in particular the gravity of the allegation that his client was a drug-dealer and a loan shark, which the jury had found he was not.

The figure would be even higher, were it not for the fact that Mr McDonagh’s reputation was somewhat tarnished by the fact he had criminal convictions dating back more than three decades and had made a tax settlement with the Criminal Assets Bureau over unpaid income and capital gains taxes and overpayment of social welfare, Mr Doyle said.

The issue of accrued interest should not be a consideration in dealing with what should happen next in this case, Mr Doyle said.

The 2008 libel award was against Sunday Newspapers Ltd, publishers of the Sunday World, over an article published in the paper after gardaí seized IR£500,000 worth of cannabis and amphetamines in Tubbercurry, Co Sligo, in August 1999.

The article, which described Mr McDonagh as a “Traveller drug king”, was published during Mr McDonagh’s seven-day detention for questioning in connection with that seizure.

Mr McDonagh denied any involvement in drug-dealing and was ultimately released without charge.

He claimed the story tore up his family and led to him being shunned in Sligo.

The Sunday World denied libel and pleaded that the article was true.

In 2008, the High Court jury said the paper failed to prove Mr McDonagh was a drug-dealer and loan shark and therefore had libelled him, although it did find that he was a tax cheat and a criminal.

The paper appealed that decision and in 2015 the Court of Appeal found that the jury decision was perverse and that Mr McDonagh was a drug-dealer.

Mr McDonagh appealed that decision to the Supreme Court, which subsequently said the appeal court was incorrect and its order must be reversed in full.