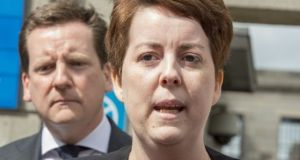 The five-judge court’s decision in the Ruth Morrissey case will impact on other cervical cancer cases and the work of the Cervical Check tribunal. Photograph: Dave Meehan/The Irish Times

The Supreme Court has dismissed appeals by the HSE and two laboratories over key High Court findings concerning the proper “standard of approach” to be adopted by cervical cancer screeners.

The five judge court’s unanimous judgment has set out the proper approach to be adopted by a screener in cases like that of Limerick woman Ruth Morrissey and has important implications for other cervical cancer cases and the work of the CervicalCheck tribunal.

The overall test requires a court to determine what standard a “reasonable professional” would apply, the court outlined. All the relevant witnesses in this case had agreed a screener should not give a clear result in respect of a slide “unless they had no doubt but that the sample is adequate and did not contain any suspicious material”, it said.

It found the High Court applied the proper standard in finding negligence by two laboratories and the HSE concerning the treatment of smear slides of Mrs Morrissey take under the CervicalCheck screening programme.

While overturning a High Court finding the HSE was vicariously liable for negligent acts of the laboratories, the Chief Justice, Mr Justice Frank Clarke, also said the HSE, in the manner in which it adopted and promoted CervicalCheck and in all the circumstances of Mrs Morrissey’s case, had a “non-delegable duty” in respect of patients availing of CervicalCheck.

There was nothing in how the programme was operated which would lead a reasonable person to conclude the HSE has absolved itself of obligations in respect of the screening part of the programme, he said.

On that basis, he dismissed the HSE’s argument it should not be fixed with any liability in respect of negligence established against the laboratories. Earlier in the 135 page judgment, he stressed there may be several reasons why a person who got a clear result on a screening process might later be diagnosed with the relevant disease without any negligence by any party.

The assessment of whether there is negligence in any particular case will involve findings of fact by a trial judge based on evidence and each case “will necessarily depend to a significant extent on its own facts”.

The HSE and two Irish based laboratories — Quest Diagnostics Ireland Ltd and Medlab Pathology Ltd — appealed a July 2019 judgment by the High Court’s Mr Justice Kevin Cross finding negligence against them and awarding €2.1 million to Mrs Morrissey and her husband Paul over misreading of Mrs Morrissey’s cervical smear slides.

The government guaranteed, irrespective of the outcome, that the couple will retain the entire damages, some €2 million of which is against the labs arising from an indemnity for the HSE, plus their legal costs.

The appellants’ particular concern was about a High Court finding that screeners should have “absolute confidence” that a sample is adequate and that there is no abnormality before reporting it as negative.

Mrs Morrissey was diagnosed with cervical cancer in 2014 and her case concerned smears taken under the CervicalCheck screening programme in 2009 and 2012 and tested respectively by Quest and Medlab.

She was not told until May 2018 that a 2014 review showed two smears were reported incorrectly. The Chief Justice, Mr Justice Frank Clarke, was the author of the court’s judgment, delivered on Thursday by Ms Justice Elizabeth Dunne sitting in the Supreme Court.

The judgment dismissed all the appeals apart from an appeal by Medlab over one aspect of the High Court damages finding. The Chief Justice said the background “involves a particular human tragedy” but the court’s task was to address five sets of legal issues.

The first was the proper standard of approach to be adopted by a screener in a scheme such as CervicalCheck. A Supreme Court judgment, Dunne V NMH, remains the basis for identifying the legal standard of care by reference to which a claim for clinical negligence is to be assessed, he said. The legal standard of care in clinical or professional negligence claims requires a court to assess whether no reasonable professional of the type concerned could have carried out their task in the manner which occurred in the case in question.

While the High Court’s use of the words” absolute confidence” to describe the proper approach “may have created more confusion than clarity”, it is clear all the relevant witnesses in this case had agreed a screener should not give a clear result in respect of a slide “unless they had no doubt but that the sample is adequate and did not contain any suspicious material”.

“That standard is not one imposed by the court but rather one which stems from the profession itself.” The determination of that standard requires either agreement between the parties or, in the event of disagreement, an assessment by the court of expert evidence.

The High Court applied the appropriate standard in reaching its conclusions, he held. He rejected arguments by both laboratories the trial judge failed to engage with some aspects of the case which they had made on the facts. The Chief Justice noted the High Court case was truncated for reasons of Mrs Morrisse y’s health. While it would have been preferable for the trial judge to have give more detailed reasons on some aspects, his judgment on the issues in this appeal did not fall below the “irreducible minimum” of reasoning.

He allow Medlab’s appeal over damages awarded to Paul Morrissey for having to replace services which would have been provided to the family by Mrs Morrissey were it not for her reduced life expectancy.

The High Court erred in awarding Mr Morrissey damages in respect of the costs of providing for services which Mrs Morrissey might have been expected to provide free for the family had she a normal life expectancy. The law in this area may be “potentially anomalous” in some respects but any change is a matter for legislation, he said.

Submissions on the precise orders to be made, including amended damages to Paul Morrissey, arising from the judgment will now be filed electronically. If there is any disagreement on those, the court will decide later how that should be best addressed in light of the coronavirus crisis.