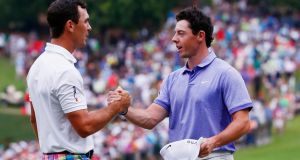 Rory McIlroy shaking hands with Billy Horschel of the US at the East Lake Golf Club yesterday in Atlanta. Photograph: Sam Greenwood/Getty Images

A High Court judge today ordered the world’s number one golfer Rory McIlroy and his former management company, Horizon Sports Management, to engage in peace talks over the next four weeks.

McIlroy’s legal battle with Horizon also involves the affairs of his Ryder Cup team mate Graeme McDowell and Mr Justice Brian McGovern said it involved such sensitive matters that the sides should engage in mediation.

Barrister Rossa Fanning, counsel for McIlroy, stressed to the court today that Mr McIlroy had no issue with Mr McDowell but undoubtedly in the run-up to the competition, which begins on September 23rd, the world’s top golfer will have to consult with his legal team about the new developments.

During an application today for discovery of a new tranche of documents, many relating to Graeme McDowell’s contractual relationship with Horizon, the judge said some issues were so sensitive as to make the case highly suitable for mediation. The court granted limited discovery of documents.

Judge McGovern told lawyers for both sides that the court had the power to stay the proceedings for not more than 28 days to allow consideration of mediation or arbitration to take place. He said he would not bar progress of the case, which is due to be heard on February 3rd next, but would direct that the parties engage in mediation over the next 28 days.

“Is this not a case that is made for mediation?” he asked Mr Fanning, for McIlroy, and Ciaran Lewis for Horizon and two related defendants. “The case has all sorts of sensitivities involving two players on tour, a manager of one of them and a former manager or agent of the other. It has all sorts of complex issues involving relationship matters,” the judge said.

Judge McGovern said: “It seems to me to be a case made for the mediation process.”

Mr Fanning said mediation had not been considered as the parties had seen the case from totally different aspects. He said he did not have instructions to respond directly to the court’s remarks but would relay them to his client.

“I hear what the court has said and when a judge makes such a suggestion it is always incumbent upon us as barristers to bring that to the attention of our client,” Mr Fanning said.

Mr Lewis told Judge McGovern that he had sought instructions from the defendants over lunch and he had been directed to inform the court that the defendants would be willing to engage in mediation.

The judges remarks were made during an application by Mr Fanning for discovery of documents relating to contractual relationship between Horizon Sports Management Limited and the golfer Graeme McDowell including statements or representations making a comparison with or contrast between contractual terms of both golfers with the defendant.

McIlroy has claimed he got markedly inferior representation terms compared to fellow golfer McDowell despite alleged representations that he would get similar terms.

He alleges it was represented to him by Conor Ridge of Horizon that he would get the same terms as McDowell regarding on course earnings, off course earnings, bonuses and commission, fees and charges.

Mr Fanning told the court that Mr McIlroy had been allowed by the High Court to amend his pleadings and to claim misrepresentation and it was with regard to these amended pleadings that he was seeking the new discovery of documents.

Mr Lewis opposed the granting of the detailed discovery of McDowell’s contractual arrangements with Horizon of which Mr McDowell was a shareholder.

He told the court that solicitors for Horizon and the two related defendants, Gurteen Limited and Canovan Management Services had taken a positive attitude to discovery and agreement had been reached on 21 of 23 categories.

Thousands of man hours had already been applied to discovery of documents at a cost of €45,000 but there were certain matters still in dispute.

Mr Lewis said Mr McIlroy still enjoyed all of the privileges of the contract he had signed with Horizon with none of the obligations. The defendants had been utterly compliant and amenable yet faced a writ suggesting the contract was unfair and that the terms were unconscionable despite being similar to his previous management’s terms.

Conor Ridge, a director of Horizon Sports, told the court in an affidavit that it was common case between the parties that Mr McIlroy entered into a Representation Agreement with Gurteen Limited on December 2011 and that this agreement was amended in March 2013.

He said Mr McIlroy was seeking a declaration that he was entitled to rescind the agreement or that it was void for breach of fiduciary duty.

The defendants absolutely rejected the allegations and intended to fully contest the claims.

He said it was the defendants’ position that it remains the lawfully appointed agent of Mr McIlroy and would continue to be so until December 31st 2017.

Mr Ridge alleged Mr McIlroy was doing no more than using the court case in an attempt to renege on a binding commercial agreement. The second defendant, Gurteen Limited, was seeking a declaration that it continued to be Mr McIlroy’s lawful agent it was seeking the discharge of commissions due from McIlroy.

The court heard that the last commission payment made by McIlroy to the defendants was for the January to March quarter of 2013.

The defendants are also claiming damages against McIlroy for breach of contract.

Since the purported break-up between McIlroy and Horizon he has won a number of tournaments chief among which have been the British Open and the USPGA. Last week he was narrowly pipped for the $10 million bonus in the Fedex Cup on the US PGA Tour.