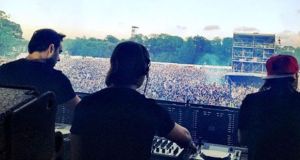 Swedish House Mafia performing at the Phoenix Park in 2012.

A young man who stabbed two innocent bystanders during the infamous Swedish House Mafia concerts in the Phoenix Park has been jailed for four years.

Raymond Donnan (24) was in a group of eight males and four females that took part in separate attacks on other concert goers.

Donnan’s defence counsel, Michael Bowman BL, said that Donnan had consumed an entire bottle of rum after security staff had stopped him from bringing the alcohol into the park.

He said his client was told he could drink it immediately before getting in. Counsel said the organisers of the concert were “reprimanded severely” after the dance music event.

Judge Martin Nolan imposed a four year jail term and said that Mr England was lucky not to have suffered worse injuries. The other victim was never identified.

Garda Sergeant Shane McCartan told Shane Costelloe BL, prosecuting, that an off duty garda was at the concert himself when he witnessed Donnan and about eight young men and four young women set on another man for no apparent reason.

He said that Donnan stabbed this first victim three times in the torso while the off duty garda went off to find other gardaí and security staff.

He returned with these to find the gang attacking Mr England. One man struck him over the head with a bottle and then used the broken bottle to stab him in the arm.

When Mr England tried to get away Donnan stabbed him multiple times in the back. Sgt McCartan testified that the blade of the knife was four to five inches long.

Sgt McCartan said that at this point gardai were preparing to safely remove Donnan from the crowd and arrest him but he and three other men immediately attacked a third victim, punching and kicking him.

Gardaí then moved in, surrounded Donnan and arrested him.

The court heard Donnan’s previous convictions include sale or supply of heroin and possession of a Stanley knife blade at in Dublin city centre.

Mr Bowman said there was little he could say to defend what was an “unprovoked gratuitous act of violence on innocent concert goers”.

He said that as a result of how the concert was managed and “poorly marshalled”, event organisers met afterwards with the garda commissioner and protocols were put into place for the running of any future events in the park.

Counsel said that concert goers who showed up with alcohol were allowed to stand to one side and consume the alcohol there and then rather than having it confiscated. He said this resulted in a number of arrests for violence, public order and drunkenness.

He said Donnan, in “an act of gross stupidity”, drank an entire bottle of rum and was “ferociously intoxicated” but asked the Court to consider the “impetuosity” of youth in passing sentence.