Man facing extradition on terrorism charges may get hearing in July 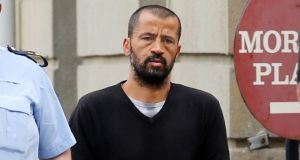 Ali Charaf Damache could face up to 45 years in jail if convicted in the US. Photograph: Collins Courts

A man whose extradition on terrorism charges is being sought by the US authorities may get a hearing in July of his appeal against the High Court’s refusal to permit judicial review of a decision not to prosecute him here.

Ali Charaf Damache (50), an Algerian-born Irish citizen previously with an address in Co Waterford, is wanted by the US authorities in connection with an alleged conspiracy to provide support to terrorists.

The application for his extradition is listed for hearing on September 8th before the High Court.

Prior to that, Mr Damache’s counsel Mark Lynam BL today asked the Chief Justice, Ms Justice Susan Denham, to grant a priority hearing of his Supreme Court appeal against the High Court’s refusal of leave to bring a challenge, in judicial review proceedings, to the Director of Public Prosecution’s decision not to propsecute him here.

If convicted in the US, Mr Damache could face up to 45 years in jail which was “a lot more” than could be imposed in Ireland, the court previously heard.

Today, Mr Lynam said he appreciated the Supreme Court’s list was full but this was an “exceptional” case where his client remained in custody solely in connection with the extradition request.

Counsel for the DPP said the DPP’s decision was taken in March 2011 and the extradition request was made in 2012. The DPP was anxious this matter be dealt with.

The Chief Justice said she was unable to give a precise date for the appeal at this point but would try and allocate a date sometime in July.  The appeal would be given priority if there was any fallout of cases from the cout’s list, she said.

If a priority hearing of the appeal against refusal of judicial review is not possible before September 8th, the Supreme Court previously said it would reconsider Mr Damache’s application for a stay on the extradition hearing until the appeal is decided.

Mr Damache, who has been living in Ireland for more than ten years, is wanted on charges alleging conspiracy to provide material support to terrorists and attempted identity theft to facilitate an act of international terrorism.

The US alleges Mr Damache conspired with American woman Colleen LaRose, who used the online name “Jihad Jane”, and others to create a terror cell in Europe. LaRose was sentenced last January to 10 years in prison after being convicted of planning to murder Swedish cartoonist Lars Vilks, who had depicted the head of the Muslim prophet Mohammad on a dog.