Appeal hearing, expected to last for a full day, set for January 19th next year 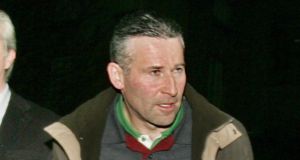 Liam Campbell: The European Arrest Warrant issued by Lithuanian authorities had sought to prosecute him on three offences: preparation of a crime, illegal possession of firearms and terrorism. Photograph: Courtpix

Liam Campbell, who was found civilly liable for the Omagh bombing, has been given a date next January to appeal an extradition order surrendering him to Lithuania, where he is to answer charges of international weapons trafficking.

Campbell (58) was arrested in Upper Faughart, Dundalk, Co Louth, on December 2nd, 2016, on foot of the second European Arrest Warrant (EAW) issued by Lithuanian authorities to be endorsed by the High Court here. It was the third attempt overall by Lithuania to seek Campbell’s surrender.

The 1998 Omagh bombing was the single deadliest incident in the Troubles, resulting in 29 deaths.

In a judgement returned from the High Court on June 26th, Ms Justice Aileen Donnelly said she was satisfied that an order for the surrender of Campbell could be made.

However, Campbell lodged an appeal against his extradition order which was given a date for hearing in the Court of Appeal on Monday.

During case management procedures at the court, Mr Justice John Edwards fixed January 19th next year as for the date for the appeal hearing, which is expected to last a full day.

Ronan Kennedy SC, for the State, asked for Campbell’s hearing to be put into the next case management list before the Court of Appeal in order to get the earliest possible date.

Mr Justice Edwards agreed for Mr Campbell’s case to be mentioned before the three-judge court on October 9th.

In his submission for leave to appeal, Remy Farrell SC for Mr Campbell successfully argued that there was a question on a point of law as to whether or not the wording of an “intention” by a foreign jurisdiction to put someone on trial was the same as putting them on trial.

The Minister for Justice, represented by Mr Patrick McGrath SC, had opposed the submission for leave to appeal.

Ms Justice Donnelly formally made the order for Campbell’s surrender on July 13th and also granted him leave to appeal his surrender on a point of law. She said that the High Court was “amenable” to clarity being sought as to whether an intention to put someone on trial is “coterminous” with putting them on trial.

The judge said that the respondent’s case was on “very nuanced matters” and that it was not “necessarily about the strength of the point in the case” but it was whether or not there was “uncertainty”.

The EAW had sought Campbell to prosecute him on three offences: preparation of a crime, illegal possession of firearms and terrorism. The maximum sentence for the offence of terrorism is 20 years.

The warrant alleges that Campbell “made arrangements, while acting in an organised terrorist group, the Real Irish Republican Army (RIRA) to acquire a substantial number of firearms and explosives from Lithuania and smuggle them into Ireland”.

It further alleges that during the end of 2006 to 2007 Campbell “made arrangements with Seamus McGreevy, Michael Campbell (his brother), Brendan McGuigan and other unidentified persons to travel to Lithuania for the purposes of acquiring firearms and explosives, including, automatic rifles, sniper guns, projectors, detonators, timers and trotyl [TNT]”.

Campbell had previously spent four years in custody in Northern Ireland during a second attempt to extradite him but was released when he succeeded in his objection that to do so would be a breach of his rights.