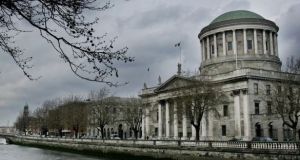 The woman, who cannot be identified, had been in a relationship with the children’s father for many years. Photograph: Bryan O’Brien

A woman seeking to bring family law proceedings against her allegedly violent former partner has launched a High Court challenge over being refused legal aid.

The mother of two young children, who is reliant on social welfare payments, claims her application for legal aid was turned down by the Legal Aid Board because she is in receipt of the Housing Assistance Payment (HAP).

The woman, who cannot be identified, had been in a relationship with the children’s father for many years.

She claims that relationship was marred by domestic violence and eventually broke down, resulting in her having to go to a women’s refuge. She and the children have since moved into rented accommodation.

She wants to bring family law proceedings against her former partner regarding issues over their former home, maintenance and contributions made by her to the household.

The High Court heard she lacks the means to pay lawyers and had applied for legal aid to the board.

She claims, when assessing her application, the board included her HAP payment as income which put her above the financial threshold for legal aid and her application was refused.

The refusal was confirmed following an internal appeal last October. She claims the decision is wrong and breaches her rights.

The board, it is claimed, failed to take into account that she lacks the means to meet the cost of litigation against her former partner.

It also failed to have regard to the fact the HAP is paid to the landlord, not the applicant, and is a form of social housing support, not income, she claims.

The HAP is not a benefit in kind, or partly free board, and is only made to those unable to provide accommodation from their own means, it is claimed.

In judicial review proceedings against the Legal Aid Board, the woman seeks various orders, including quashing the board’s refusal of her application for legal aid and directing it to reconsider her application.

It is argued the refusal was unreasonable, was based on an error of law and irrelevant considerations, and constitutes a breach of the board’s statutory obligations. The Minister for Justice is a notice party to the action.

Permission to bring the case was granted this week, on an ex-parte basis, by Mr Justice Charles Meenan. The matter was returned to March.