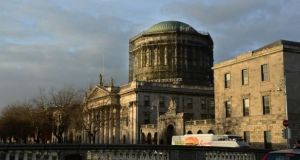 The woman’s life appears to be ‘spiralling out of control’ the court heard. File photograph: Cyril Byrne

A vulnerable young woman who witnessed her mother’s attempted suicide as a child and whose dangerous behaviour is escalating is to be made an adult ward of court against her wishes.

The Child and Family Agency applied for the 18-year-old woman to be made an adult ward due to its concerns about the risk she poses to herself and others.

The president of the High Court, Ms Justice Mary Irvine, said the woman has become increasingly violent and aggressive to those currently involved in her care, continually goes missing and is becoming ever more involved with alcohol, drugs and criminal activities.

On the evidence, the judge was satisfied the woman has an intellectual disability, is presently of unsound mind, does not have power over the choices she makes and should be brought into wardship. The CFA is expected to apply later for orders concerning an appropriate placement.

Earlier, the judge noted, when the woman was a toddler, concerns were raised about her mother being neglectful of her care. Some years later, when still a young child, she witnessed her mother’s attempted suicide.

It was “little surprise” she was not left unscarred by her early years during which she lived some of the time with her father, extended family and foster parents before ending up in a residential facility where her concerning behaviours included self-harm and taking overdoses of over the counter medication, physically assaulting care staff and absconding.

When a teenager, she was placed in secure care and remained there some four years. While she had difficulties there, she responded moderately well to that secure environment and built up reasonable relationships with some carers but, soon after her discharge some months ago, was hospitalised due to an overdose.

It was a “gross overstatement” to say attempts to move her to stepdown placements in the community have been unsuccessful, the judge said. She had engaged in ever more risk taking behaviours in four different placements.

Her life appears to be “spiralling out of control”. If given the opportunity she would head into an urban environment, get drunk, take drugs, steal, get into fights, potentially take overdoses, get injured or self harm, and end up in a Garda station or in hospital. It was unclear sometimes whether she had actually taken substances or was engaged in “care-eliciting behaviour”.

The assaults she engaged in are “not trivial” and included incidents where one staff member had their nose broken. She recently stole a car and wrote it off in a crash in an area where children could have been killed or injured, the judge noted.

She accepted a “wealth of evidence” from the woman’s guardian and a psychologist, who have supported her during her teenage years, she is a likeable but troubled and vulnerable person who is impelled to engage in “alarming” behaviour principally because of her difficulties with working and verbal memory, comprehension and language. A consultant psychiatrist with extensive experience of troubled adolescents had agreed.

The judge believed two other psychologists who assessed the woman as having capacity may have reached other conclusions had they known her longer.

The judge considered the woman has a significant intellectual disability as a result of which she cannot absorb or manage information in a manner which currently allows her to make informed decisions and weigh up the risks attached.

In deciding on wardship, she could not take into account arguments by the woman’s solicitor, Catherine Ghent, any lack of capacity was because she had not come onto the State’s radar as a child potentially at risk who did not get the intervention required.

Whatever the reason, it is clear the woman is presently of unsound mind and incapable of managing her person or property, the judge said. It would be “particularly reckless” to defer wardship given evidence that her risk taking behaviour is escalating to the point she is putting her life, and that of others, in danger.

While the woman continually states she does not wish to be brought into wardship, much of her behaviour over years suggests she “actually craves containment” and responds best to a lot of minding and care.

The woman can apply to be discharged from wardship any time she feels she can establish capacity to manage her person and property, the judge stressed.