Tesco employee who slipped in toilet and fractured his wrist awarded €65,000

Use of smooth ceramic tiles in factory toilet was unsafe and dangerous, says judge 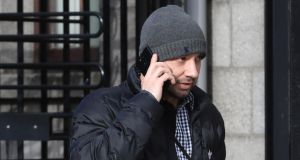 Former Tesco employee Damien Jedruch outside the High Court where he was awarded damages of €65,000. Photograph: Collins Courts

An employee who slipped in a Tesco toilet has been awarded €65,000 damages by the High Court.

A stay applies on the award in the event of an appeal.

Damien Jedruch suffered fractures to his right elbow and wrist when he slipped in the warehouse toilet where he worked as he walked across the floor to use the dryer after washing his hands.

Mr Justice Anthony Barr found the use of smooth ceramic tiles in a toilet used by a large number of employees was unsafe and dangerous given the high risk of slipping on the tiles when wet.

The judge said 300 employees worked in the warehouse and, had Tesco taken reasonable care for the safety of its employees, it would have used slip-resistant or non-slip tiles in the toilet area. There was no good reason not to use non-slip tiles in a bathroom frequented by a large number of people, he said.

“While the owners of a hotel may not like using such tiles in a bathroom because it is harder to clean them and keep them looking well, such considerations do not apply in a factory or warehouse,” he said.

Mr Jedruch (35), from near Gdansk, Poland, had sued his then employer, Tesco Ireland Ltd, over the accident in the toilet at the Donabate Distribution Centre, Co Dublin on April 21st, 2015. He had been an employee of Tesco for eight years before the accident but has since returned home to Poland.

He had claimed the tiles were unsafe and dangerous and there was a failure to maintain the area in a safe and proper condition. Tesco denied the claims and contended the toilet had been cleaned by a contract cleaner only minutes before Mr Jedruch’s accident.

Mr Justice Barr said there was little dispute there was considerable water and dirt in the form of boot marks on the toilet floor surface. The judge was satisfied the cleaner on the morning of the accident did wash or mop down the male toilet area but had removed the cleaning sign from the doorway when the floor was still wet after cleaning.

“This would explain the considerable amount of water which was on the floor surface at the time of Mr Jedruch’s fall,” the judge said. Mr Jedruch was out of work for 44 weeks after the accident and did not exaggerate his injuries in any way, the judge found.