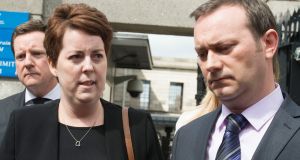 Ruth Morrissey and her husband Paul outside the Four Courts on Friday after the conclusion of her case. Photograph: Dave Meehan/The Irish Times

Terminally ill Ruth Morrissey and her husband Paul, who sued over her CervicalCheck smear tests, have been awarded a total €2.1 million damages by the High Court after winning their landmark action.

Two laboratories were held liable for the bulk of the €2.1 million award, with the HSE’s liability assessed at €10,000.

Mr Justice Kevin Cross said Ruth Morrissey’s life had been ruined and she has suffered a life sentence which she is fully aware is expected to take effect within two years and for which there is no reasonable prospect of a reprieve.

“She has suffered a catastrophic injury no less than that of a tetraplegic or someone with brain damage,” he said.

She won her case against the HSE and the two laboratories in relation to the testing of her cervical smear slides in 2009 and 2012 in the landmark action relating to the CervicalCheck controversy.

Outside court Ms Morrissey, supported by her husband Paul, and accompanied by her solicitor Cian O’Carroll, said she wanted to spend whatever quality time she has left with her daughter Libby.

“I did not think I would be in this position because our Taoiseach told us none of us would have to go through this, but unfortunately I am the one who had to do it. I hope that’s a positive thing, so the women who are left, they don’t need to do this and fight for their right to have a good life of what they’ve left.”

She encouraged women to continue getting smear tests “even though it failed me” and told young women to avail of the HPV vaccine as “this is a cancer you do not want.”

Mr Justice Cross ruled the HSE is entitled to an indemnity against the laboratories in respect of the entirety of the claim except for €10,000 relating to the fact Ms Morrissey was not informed of an audit review of her smear tests.

The judge ruled Ms Morrissey must fail in the allegation of negligence against the HSE in relation to her care after her treatment in 2014.

He found the HSE was not negligent over not giving repeat imaging and surveillance to her.

Paul Morrissey held his wife as the judge read out his findings to a packed courtroom.

Finding against US laboratory Quest Diagnostics, Mr Justice Cross said a reasonably competent screener at the relevant time should not have failed to see what was on Ms Morrissey’s 2009 slide.

The cells on the slide, as per the evidence of consultant cytopathologist Dr Michael McKenna, had “clear peculiarities” and this ought to have been seen by a competent screener.

“I believe the American screeners were utilising their professional skill and judgment and recording what they believed as a matter of probability was the case but that they ought not to have treated the slide as negative given the abnormalities as identified by Dr McKenna”.

Referring to the 2012 smear test by the MedLab laboratory, he said, although it contained abnormal and non-negative cells, the nature of these cells was such the failure to record them as abnormal was not a breach of duty of care.

MedlLab was negligent in failing to have the slide properly tested for adequacy, he held. Had the adequacy test been conducted in accordance with the guidelines required by the HSE, then, as a matter probability, the slide would have been reported as inadequate and Ms Morrissey would have been required to be retested between one and three months later.

Had Ms Morrissey’s slide been properly analysed in 2009, or had the slide in 2012 been deemed inadequate and she had been reviewed within one to three months, then, as a matter of probability she would have been re tested, her slides would have been abnormal, she would have been sent for a colposcopy, been treated with a non-invasive procedure and would never have contracted cancer in 2014, he found.

She would have been spared the pain and distress of what followed and her cancer would not have recurred, he found.

“She would have been spared the prospect and knowledge that her daughter and her husband will have to go through life without her care and guidance in particular she will not live to see her daughter make her way through life and probably start her own family and of most importance, her life would not have been so tragically cut off,” the judge stated.

Legal teams representing other women who are taking similar type actions relating to smear tests taken under the CervicalCheck screening programme have been monitoring the case which started in July last year and ran for 37 days in total.

It was claimed there was failure to correctly report and diagnose and misinterpretation of her smear samples taken in 2009 and 2012 and her cancer spread unidentified, unmonitored and untreated until she was diagnosed with cervical cancer in June 2014.

It was further claimed a review of the 2009 and 2012 smears took place in 2014 and 2015 with the results sent to Ms Morrissey’s treating gynaecologist in 2016, but she was not told until May 2018 of those results which showed her smears were reported incorrectly.

The HSE had admitted it owed a duty of care to Ms Morrissey but not her husband. The laboratories denied all claims.

The Morrissey side further contended when the case resumed in January this year if Ms Morrissey had been told the results of the smear test audits in late 2014 or early 2015, she would have insisted on an MRI and other scans.

Ms Morrissey was diagnosed with cervical cancer in 2014 and suffered a recurrence last year. The court has previously heard the recurrence in her pelvic wall has spread to her bone and she has at maximum two years to live.