Developments disclosed during proceedings against Freddie Scappaticci , who denies spying 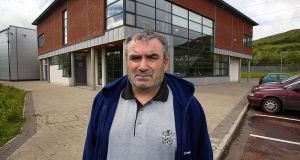 Freddie Scappaticci: denied claims that he is Stakeknife.

An investigation into a British spy inside the IRA could lead to more than 30 people facing criminal proceedings in connection with at least 10 murders, the High Court in Belfast has heard.

Counsel for the PSNI centred on the agent codenamed Stakeknife revealed that a dozen files have gone to the Public Prosecution Service (PPS), with more set to follow.

The developments were disclosed during civil proceedings against Freddie Scappaticci, who denies being the spy.

The 73-year-old west Belfast man is facing a total of 32 separate lawsuits over his alleged activities while in charge of the IRA’s internal security team, the so-called ‘Nutting Squad’.

But Jon Boutcher, the former Bedfordshire Chief Constable in charge of the PSNI’s Operation Kenova inquiry, wants those actions put on hold until his criminal investigation is completed.

In court on Friday a barrister representing Mr Boutcher claimed it could have a “chilling” effect on victims and witnesses who may be too scared to co-operare if material was disclosed during the civil litigation.

Tony McGleenan QC confirmed: “We now have prosecution files in respect of multiple murders going forward to the PPS.”

It was disclosed that 12 files have gone so far, with nine relating to the offence of murder, and others for conspiracy to murder or to pervert the course of justice. A further three deal with perjury offences.

Another four or five files are expected to be sent at a later date.

“They relate to homicide matters, involving a further cohort of possible defendants in the low double figures,” counsel added. “The scale and complexity of the investigation has advanced considerably.”

With more than 60 police and civilian personnel involved in Operation Kenova, the investigative team has obtained 1,000 statements, 12,000 documents and over a million pages in exhibits.

Detectives believe they have uncovered evidence of criminal wrongdoing by both IRA and security force members.

Mr Scappaticci left Northern Ireland for a secret location in 2003 after he was widely named as being Stakeknife.

In one case he is being sued, along with the Ministry of Defence (MoD) and the PSNI, by Newry woman Margaret Keely. She alleges that she was wrongfully arrested and held at Castlereagh police station in 1994 following an IRA attempt to murder a senior detective in east Belfast.

Mrs Keeley was released without charge, but claims she was then taken to a flat in the New Lodge area of the city and questioned by an IRA team.

Mr Scappaticci was one of the men who carried out two debriefing sessions, according to her account.