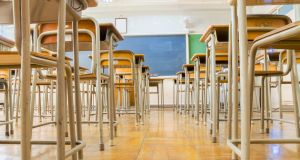 A secondary school has won a High Court order quashing a direction requiring it to enrol a student.

A secondary school has won a High Court order quashing a direction requiring it to enrol a student in breach of its own selection procedures for admission.

Ms Justice Úna Ní Raifeartaigh directed the matter be reconsidered by a different Department of Education appeals committee’s in accordance with her findings.

The judge earlier observed, while the Education Act provides ministerial directions in relation to admissions shall be respected by school boards of management, no relevant directions have been published by the Minister.

The school, represented by Feichín McDonagh SC and Joe Jeffers BL, took proceedings over the committee’s decision that the boy be enrolled next September.

In her judgment, Ms Justice Ní Raifeartaigh said the primary issue was whether the committee was entitled to take into account the fact the boy’s parents moved him from one primary school to a ‘feeder’ school for the last two years of his primary education as a result of discussions with the now former principal of the secondary school.

That principal had said those discussions were held but he had not, and could not, give any guarantee the boy would be enrolled.

The admissions policy provides, where children do not fall into categories such as siblings of past pupils and children already in the school and attendance at the primary feeder school, the selection procedure was to be by random lottery.

The boy was not selected by lottery and the committee decision, if valid, meant the school would be required to admit him despite his not being selected in accordance with the procedure in the school’s admissions policy, she said.

The boy was among 298 applicants for 180 places in the school for the 2017/2018 year. After offering places to 173 applicants who fell into the first five categories of the order of priority in its admissions policy, it had six remaining places.

The boy was not selected during a random selection process for those six and 34 other places that became available when some of the 173 offers were not taken up.

In their appeal, the boy’s parents argued they had a legitimate expectation he would be admitted after they moved him to the feeder school. That was not easy for him for reasons including he had to leave friends and repeat a class.

The appeals committee, having balanced the parents’ position and admissions policy, recommended he be enrolled.

The judge said she could readily understand, “at a human sympathy level”, why the committee did so but the legal issue was whether it was entitled to take into account the boy’s personal circumstances and what was said by the former principal.

She held the doctrine of legitimate expectation did not apply in this case and also held, based on various legal decisions, an appeals committee should “apply” an enrolment policy and has no jurisdiction to review a school’s entrance policy.

On foot of those and other findings, she quashed the decision and directed a fresh hearing.