Ruth Morrissey: ‘I am not frightened to die, but I don’t want to’ 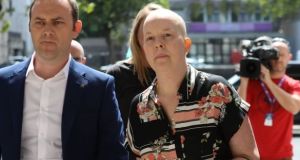 Ruth Morrissey, whom the court was told may only have between one to two years to live, said the news of her prognosis was devastating. Photograph: Collins Courts.

A 37-year-old woman with breast and cervical cancer, who is suing over the alleged misinterpretation of two of her cervical smears tests, has told the High Court she is not frightened to die but she does not want to.

Ruth Morrissey, whom the court was told may only have between one to two years to live, said the news of her prognosis was devastating.

“You have to dig really deep. You are not going to be the same person. I am not frightened to die, but I don’t want to,” she said on the second day of her case.

A situation it is claimed allegedly developed where Ms Morrissey’s cancer spread unidentified, unmonitored and untreated until she was diagnosed with cervical cancer in June 2014.

The HSE the court has heard admitted it owed a duty of care to Ms Morrissey but not to her husband and it admits the results of her smear reviews should have been made known to Ms Morrissey. The laboratories deny all claims.

Liability is a major issue in the case.

Opening the case Jeremy Maher SC instructed by solicitor Cian O’ Carroll said aggravated and exemplary damages are also being claimed in the action by the couple who have a seven year old daughter.

Counsel said the results of the reviews of the 2009 and 2012 smears of Ms Morrissey were carried out and conveyed to her treating gynaecologist in 2016, but Mrs Morrissey was not given the review results until May this year, when she already had a cervical cancer recurrence. Ms Morrissey was also diagnosed with breast cancer earlier this year.

Counsel said experts on their side will say if the cervical smear of 2009 had been correctly reported she would have been referred for a colposcopy which would have disclosed pre cancerous cells and she may not have developed cervical cancer in 2014 which recurred this year.

Counsel said Ms Morrissey should never have developed cancer in 2014 or have had a recurrence and she is being deprived of seeing her daughter grow up and of an opportunity to live the life she had hoped.