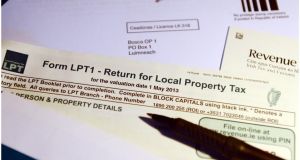 The Office of the Language Commissioner had ruled the Revenue failed in its statutory bilingual duty when it sent out only the English language version. Photograph: Bryan O’Brien

The Revenue Commissioners were wrong not to have sent out bilingual versions of an information booklet on the local property tax, the High Court ruled.

Mr Justice Colm MacEochaidh said the Revenue had not complied with the Official Languages Act 2003 as a result of failing to providing certain taxpayers with booklets either just in Irish or in both Irish and English.

The Office of the Language Commissioner had ruled the Revenue failed in its statutory bilingual duty when it sent out only the English language version.

In its High Court appeal, the Revenue disputed it had breached the Act by failing to communicate bilingually when it sent 1.7 million booklets to households in February 2013.

The court heard versions of the booklet in both English and Irish were published but only the English version was sent out, along with a letter and an application form, unless the householder had specifically registered to conduct their business with Revenue through Irish.

Only a few thousand households received the Irish language version.

In what was the first appeal against against a decision of the Language Commissioner, the court heard the commissioner received a number of complaints because under the 2003 Act, public bodies are obliged to communicate bilingually “with the public in general”.

Ben Ó Floinn argued on behalf of Revenue that material sent to 1.7 million households were not communications with the public in general because each information parcel was addressed to a specific citizen. The householder’s name was written clearly on the envelope along with the words “Private and Confidential”.

Séamus Ó Tuathail SC, for the Language Commissioner, accepted each letter was a private communication but argued the accompanying booklet was a public communication of the sort that should always be made bilingually.

Mr Justice Mac Eochaidh ruled the Revenue were wrong and said such communications should be bi-lingual in the future.