Rape victim can sue State over disclosure of address to attacker, court says 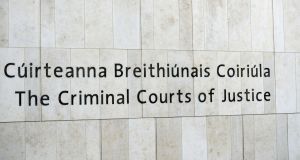 Woman said she was severely shocked and alarmed that attacker appeared to know where she now lived and it affected her recovery.

A rape victim whose new address was disclosed to her attacker after it was accessed through the Garda computer system is entitled to continue with her claim for damages against the Garda Commissioner and the State, the High Court ruled.

Mr Justice Seamus Noonan rejected an application by the State parties to dismiss the woman’s claim for personal injury over the disclosure of the information.

The woman was subjected in 2007 to severe violence and rape by a man with whom she had had a prior relationship and by whom she had children. He was convicted and sentenced at the Central Criminal Court.

She took steps to protect herself and prevent a recurrence by moving to an address unknown to her attacker or his acquaintances.

She believed she had been successful in doing so until January 2011 when a summons server called to her door to serve her with family law proceedings, taken by her attacker.

She said she was severely shocked and alarmed that he appeared to know where she now lived and it affected her recovery from the attack. She suffered an acute anxiety reaction and required anti-depressants and other medication.

She complained to the Garda Síochána Ombudsman Commission (Gsoc) about disclosure of her information. She learned from Gsoc that a garda had accessed the Garda computer system in January 2011 and had provided details to a summons server.

Gsoc had served the garda with disciplinary papers but the member concerned had denied accessing the computer. As it was possible that another member had accessed it using a different member’s ID, Gsoc concluded it was not possible to identify the person and the investigation was closed.

The woman sued for personal injury, claiming, among other things, breach of confidence/privacy, misfeasance in public office and intentional or reckless infliction of emotional pain and suffering.

The defendants applied to Mr Justice Noonan to have the case dismissed on grounds it showed no reasonable cause of action, was frivolous/vexatious and/or bound to fail.

The defendants argued they had a duty to disclose her address under the Garda Síochána Act 2005 which provides for exceptions to disclosure of personal data where gardaí can co-operate with State agencies and other bodies with the objectives including the vindication of the human rights of each individual.

They also claimed the woman had not pleaded any loss known to law as anxiety does not amount to a recognised psychiatric illness.

Mr Justice Noonan ruled the woman had raised a number of legal questions which needed to be addressed.

It was arguable gardaí did not have a legal obligation to disclose the information or that it was not necessary for the administration of justice.

It might be reasonably argued the correct course would have been for gardaí to only disclose on foot of a court order which could be formulated to protect her address from being made known to her attacker, he said.

He also rejected the argument that the woman had no actionable damage claim. While anxiety is not a recognised psychiatric illness, depression is, he said.

Her claim she suffered from headaches as a result of the disclosure is also a form of personal injury for which compensation is frequently awarded, he said.