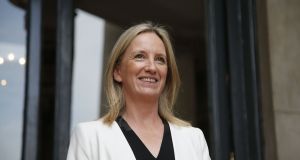 A summons server had attended at Gemma O’Doherty’s home in Dublin on a number of occasions in January, February and in June, the court was told. File photograph: The Irish Times 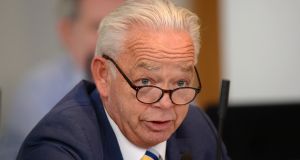 Jimmy Guerin seeks damages, including aggravated and punitive damages, as well as injunctions permanently prohibiting the continued publication of the comments at the centre of the action. Photograph: Dara Mac Donaill / The Irish Times

Activist Gemma O’Doherty has been “actively trying to evade” service of defamation proceedings brought against her by Jimmy Guerin, the brother of murdered journalist Veronica Guerin, the High Court has heard.

Mr Guerin, who is an Independent councillor on Fingal County Council, claims he was defamed in comments allegedly posted by Ms O’Doherty about him on her Facebook and Twitter accounts in July 2019.

In his action he seeks damages, including aggravated and punitive damages, as well as injunctions permanently prohibiting the continued publication of the comments at the centre of the action.

The Howth-based councillor further seeks an order restraining Ms O’Doherty from publishing similar statements about him in the future.

The matter was briefly mentioned before Ms Justice Deirdre Murphy at Monday’s vacation sitting of the High Court.

Following an ex-parte (one side only) application Mr Guerin’s lawyers secured various orders against Ms O’Doherty, including one deeming that she has been formally served with the summons outlining the action against her.

Ms O’Doherty had been “actively trying to evade service” of proceedings she is clearly aware of, it is claimed.

Ronan Lupton Bl, instructed by solicitor Zoe Mollaghan of Flynn O’Driscoll Business Lawyers for Mr Guerin, said that there had been difficulties in relation to the serving of his client’s proceedings on the defendant.

These issues had resulted in Mr Guerin’s lawyers coming to court during the vacation in order to prevent potential problems further down the line, counsel said.

The court heard that earlier this year a Belfast-based law firm had indicated it would act for the defendant, and had the authority to accept the summons on her behalf.

However, after corresponding with that firm for several months it was not retained by Ms O’Doherty.

A summons server had attended at Ms O’Doherty’s home in Dublin on a number of occasions in January, February and in June.

Summons server Brian Comiskey said in his sworn statement to the court that on the afternoon of June 18th last he called to the defendant’s home for the purpose of effecting service of the defamation proceedings on Ms O’Doherty.

He said when he knocked on the front door of the property, Ms O’Doherty opened a window. He said he told her who he was and that he had a summons for her.

Mr Comiskey said she replied, “Sorry no,” and closed the window. He had called to her home on two previous occasions but received no response when he knocked at the front door.

Efforts to serve documents on Ms O’Doherty by way of pre-paid registered post were also not successful, the court also heard.

Granting the orders sought, the judge expressed her general concern that documents in the case that had been recorded as being delivered by An Post were subsequently returned to Mr Guerin’s lawyers and marked as being not received.

The judge also gave the plaintiff’s solicitors permission to serve any further documents on the defendant by ordinary post, and could also be hand delivered to Ms O’Doherty’s home.