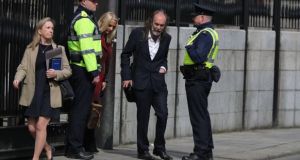 Gemma O’Doherty and John Waters are facing a significant legal bill after the High Court ruled they must pay the costs of their failed attempt to challenge laws brought in due to Covid-19.

In a ruling Thursday morning, Mr Justice Charles Meenan said the pair must pay the legal costs of both the State respondents and the notice parties, the Dáil, Seanad and the Ceann Comhairle.

The judge said that the costs, estimated to be a substantial five figure sum, should be limited to the two day hearing of their application only.

Last month the court refused to grant the pair permission to have their judicial review challenge against the laws go to a full hearing of the High Court.

Mr Waters and Ms O’Doherty, who claim the laws are unconstitutional, are appealing the dismissal of their action, which they had claimed was brought in the public interest, to the Court of Appeal.

The State, represented by Patrick McCann SC, and Gerard Meehan BL and the notice parties represented by Francis Kieran BL, who opposed the application, sought orders from the court directing the applicants to pay their costs of the High Court hearing.

Both argued that there were no factors in the action that made it exceptional to the general rule that the losing parties should pay the legal costs of the action.

Mr McCann said they were not entitled to invoke public interest as a reason for bringing their proceedings, while Mr Kieran relied on the court’s finding that the case against the Oireachtas was unstateable.

Ms O’Doherty and Mr Waters said they should not have to pay the legal costs on several grounds.

As well as claiming that the case was brought in the public interest, they also claimed they were entitled to a protective costs order.

They further claimed it was unnecessary for the Oireachtas to be separately represented from the State in the proceedings.

They also claimed that by being directed by the court that their application for permission to bring challenge should be notice to the other parties, they were presented with a legal hurdle which they ought not to have been.

In his ruling on who should pay the legal costs on Thursday, Mr Justice Meenan dismissed their arguments and said that they must pay the others side’s legal costs.

He said that their contention that they ought not to be penalised by having to pay the costs because the action was brought in the public interest “does not stand up to much scrutiny.”

The applicants, he said, did not engage with the case being made by the respondents, including the legal principles being relied on to resist their challenge, “in any meaningful way.”

He said Ms O’Doherty and Mr Waters proceeded with their application on the basis they were of the opinion that they had an arguable case, and that this in itself was sufficient for the court to grant them permission to bring their challenge.

There is no doubt that the issues raised by the widespread Covid-19 restrictions “are important matters of public interest,” he added.

However, “the manner in which the applicants conducted the proceedings, their failure to consider or answer the case being made against them and to only have regard to their own opinions meant that those proceedings were very far from being in the public interest,” he said.

In the circumstances the judge said that there was no reason for the court to depart from the normal rule that costs follow the event. The costs, he added, were limited to those associated with the two day hearing of the leave application.

In his judgment earlier this month dismissing their application for leave the judge said they had not provided the court with any expert evidence or facts to support their view that the laws challenged by the applicants were disproportionate or unconstitutional.

The laws brought in by the State to help deal with the pandemic he said in his judgment are “constitutionally permissible.”

The applicants he said who have “no medical of scientific qualifications or expertise relied on their own unsubstantiated views, gave speeches, engaged in empty rhetoric and sought to draw parallel to Nazi Germany which is both absurd and offensive.”

The judge also dismissed the applicant’s claims against the manner in which the laws were voted on and passed by the houses of the Oireachtas.

Their proceedings were also aimed at striking down temporary restriction regulations brought due to Covid-19 under the 1947 Health Act.

They claimed the laws, and the manner in which they were enacted, are repugnant to several articles of the constitution including rights to travel, bodily integrity and the family.