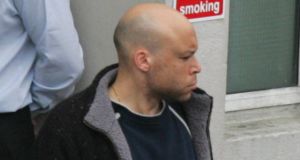 Convicted double murderer Mark Nash has stopped eating food, has lost up to four stone in weight and has been hospitalised due to concerns about his health, the High Court has heard.

As a result of those developments and a psychiatric report, the authorities are reconsidering his wish to be transferred back to Arbour Hill Prison but a decision is not expected before next Wednesday, it was stated.

The president of the High Court, Mr Justice Nicholas Kearns, was told the prison authorities were considering a decision on Nash’s application to be transferred back to Arbour Hill where he had served 15 years of a life sentence for the murder in 1997 of two people in Ballintober, Co Roscommon.

The judge was told Nash, in a letter to the prison authorities, has said he has hidden the fact he has not taken any food since June 9th last. The court was also told a psychiatric report said Nash, who is in hospital, is suicidal.

Last April, Nash (42) was given another life sentence after he was found guilty of the separate murders of Sylvia Sheils (59) and Mary Callanan (61) in 1997 at their sheltered housing in Grangegorman, Dublin. That sentence is to run from the date of his sentencing.

He was taken to Mountjoy Prison but his counsel, Hugh Hartnett SC, sought his return to Arbour Hill, arguing his client is under 23-hour lock-up at Mountjoy and his life is under threat from other prisoners.

During his 15 years in Arbour Hill,  Nash settled down, did not present any problems to authorities and was considered to be “a trusted” prisoner, Mr Hartnett said. While it is normal after sentencing to be lodged in Mountjoy, Nash had expected to be sent back to Arbour Hill, it was argued.

After the application was refused, Nash brought High Court proceedings challenging the Irish Prison Service’s refusal to transfer him back to Arbour Hill. Since the action was launched in May, he has been moved to the Midlands Prison.

Mr Justice Kearns was told by Robert Barron SC, for the Minister for Justice, there had been “a major development” in the case arising from Nash admitting in a letter he has concealed the fact he has not been taking food since June 9th.

This was despite the fact Nash has been placed in an special observation cell in mid-July to make sure he was eating, counsel said.

As a result of this and the psychiatric report, the authorities were reconsidering Nash’s application for a transfer. Among the matters to be considered were “countervailing circumstances” about Nash returning to Arbour Hill, Mr Barron said.

“A lot of information has to be taken into account and very carefully looked at before a decision can be made,” he said.  Following a question from the judge, counsel said it would be next Wednesday, at the earliest, before a decision could be made.

Mr Hartnett expressed concerns about the “perilous situation” of his client and asked whether a decision could be made earlier. Nash has lost three to four stone in weight due to his decision to forgo food, he said.

The case, if it proceeded, could take some days, counsel said.