Moriarty Tribunal fails to get order on Michael Lowry documents 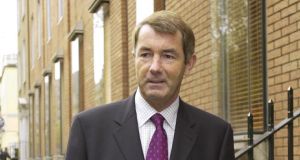 The Moriarty Tribunal has failed to get a High Court order requiring former Communications Minister Michael Lowry to produce to it certain documents used in proceedings brought against him by his former accountants.

The Tribunal sought the documents for its opposition to separate proceedings in which Mr Lowry is challenging a tribunal finding he is only entitled to one-third of his costs for appearing before it.

He claims his costs will run into millions given his centrality to the tribunal’s investigations, the assistance he gave it and the complexity of the matters involved.

Mr Justice Caroline Costello ruled Mr Lowry was not required to produce for the Tribunal affidavits which were used in a case brought against him by his former accountants, BBT Chartered Accountants, Torquay Road, Foxrock, Dublin.

BBT claimed around €1.7 million in fees from him for work they did on his behalf for the tribunal. BBT got judgment in November 2013 before the Master of the High Court for part of what it sought, with the balance to be dealt with at a later hearing.

Last March, the judgement was vacated on consent between BBT and Mr Lowry by the Deputy Master and the entire sum is to be dealt with in one single hearing pending before the High Court.

Separately, Mr Lowry had challenged the Tribunal’s decision to refuse him the bulk of his legal costs for appearing before the Tribunal and he sought orders for discovery of certain documents from it in preparation for that case.

The Tribunal then sought an order that Mr Lowry produce for inspection documents which had been used in the 2013 case against him by BBT in the Master’s Court.

Mr Lowry claimed this “notice to produce” was fundamentally misconceived and he declined to comply.

Ms Justice Costello ruled he was not required to produce on a number of grounds, including no allegation had been made relating to the Tribunal in affidavits opened in the BBT matter before the Master of the High Court.

A notice to produce is confined to documents referred to in pleadings or in affidavits in the present proceedings. The court will not order inspection of a documents if it is of the opinion that this is not necessary for either fairly disposing of the case or to save on legal costs, she said.

She said there may be another legal channel by which the Tribunal can seek the documents and she was not restricting it from doing so.

Douglas Clarke BL, for the tribunal, said other avenues such as discovery would be pursued. His side had opted for the notice to produce option in the belief it would be the most direct route to get the documents, he said.

Climate Bill will not deliver desired cut in emissions, says expert 19:01
Coronavirus: A further five deaths and 720 new cases reported by Nphet 19:17
Large retailers modify stores and block off non-essential products from customers 18:45
Woman who lost damages case over ‘thrill ride’ must pay appeal costs 18:31
Cork shootings: Postmortems on two of deceased complete with final one due on Wednesday 17:57