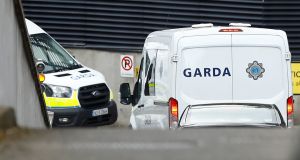 A prison service van arriving at Dublin’s Criminal Courts of Justice carrying Ronan Hughes to a hearing earlier this month after he was arrested on foot of a European Arrest Warrant. Photograph: Jason Cairnduff/Reuters 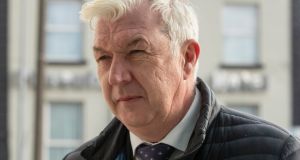 A Monaghan haulier alleged to be “the ringleader” and “chief organiser” of an organised crime group who trafficked 39 migrants found dead in a lorry container in Essex last year has been refused bail by the High Court pending an extradition hearing.

The deaths of the migrants hidden in the refrigerated trailer, inside which police found bloody handprints, was a “tragedy which rightly attracted public revulsion, outrage and anger”, Mr Justice Paul Burns said on Thursday.

The court was told at Wednesday’s bail hearing that Ronan Hughes is alleged to have “organised, paid for the travel and controlled the drivers who collected the migrants.” Gardaí gave evidence that Mr Hughes has “huge connections” and familiarity with various ports throughout Europe and had the “wherewithal to flee the jurisdiction at the appropriate time”.

Evidence was also given at the hearing that €200,000 had been frozen in 33 bank accounts linked to Mr Hughes and his family and that the accused had last year bought a 2019 BMW X5, valued at €108,000, which has since been seized by the Criminal Assets Bureau (CAB).

Mr Hughes (40), of Leitrim, Silverstream, Tyholland, Co Monaghan is wanted by UK authorities to face 39 counts of manslaughter and one count of conspiracy to assist unlawful immigration.

Returning judgment on the bail application on Thursday, Mr Justice Burns said the alleged details of the case made out against Mr Hughes indicate he had carried out a “controlling role” in the illegal operation, which had resulted in the tragic death of the Vietnamese nationals.

The High Court judge said that a person awaiting trial has a presumption of entitlement to bail unless the prosecution fails to satisfy the court to the standard of proof required. Furthermore, the State’s objections must be satisfied by cogent evidence, he said.

The prosecution does not have to prove Mr Hughes will abscond as a matter of certainty but rather they must satisfy the court that the risk of him absconding is not a possible risk but a probable one, he explained.

The judge said the deaths of the 39 migrants was a tragedy which rightly attracted public revulsion, outrage and anger. However, the seriousness of the offences cannot automatically disentitle a person to bail, he added.

Referring to Mr Hughes, Mr Justice Burns said that undoubtedly he faced extremely serious charges and he could expect to receive a very significant custodial sentence if he is convicted of the offences. The maximum sentence for manslaughter in the UK is life imprisonment, he indicated. “It’s common sense that the greater the potential sentence, the greater the incentive to abscond,” he said.

The case against Mr Hughes appears to be “a strong one”, said the judge, albeit that it has not yet been subject to challenge through a trial. The judge noted that the Minister for Justice had placed emphasis on the fact that Mr Hughes operates an international haulage business with extensive contacts abroad, has a detailed knowledge of ports, a history of smuggling and access to extensive funds.

Counsel for the respondent had relied on the fact that he had not gone into hiding prior to his arrest, his assets were frozen, he had significant ties in this jurisdiction, had no history of taking bench warrants and previously stood trial when he was prosecuted in the UK, he said.

However, Mr Justice Burns emphasised Mr Hughes has significant ties outside the jurisdiction, operates an international haulage business for many years, travels extensively and has a business registered in Bulgaria. The judge said it was difficult to disagree with Det Sgt Jim Kirwan’s evidence that Mr Hughes would have knowledge to flee through a port without the law knowing and pointed to the fact that the ports were still open despite the Covid-19 pandemic.

He took into account that Mr Hughes has access to considerable funds and said he may still do so as the Criminal Assets Bureau (CAB) investigation is ongoing. He uses a Northern Ireland driving licence and did not give any convincing explanation for this, he said.

Mr Hughes had not sought to abscond the jurisdiction since the date of the alleged offences and his recent arrest, and this must stand to his credit, observed the judge.

In summary, Mr Justice Burns said there was a risk of absconding in every case, which runs from very low to very high. He said he was satisfied that the prosecution had met the burden of proof required. Mr Hughes was a probable flight risk if bail was granted and there was a very serious risk of him absconding, he said.

He described Mr Hughes’s evidence as unconvincing and lacking in credibility and in particular he noted Mr Hughes’s lack of knowledge concerning his business affairs, the previous movement of vehicles from his yard at Tyholland on October 24th, 2019 and the fact his driver’s licence is registered to an address in Northern Ireland. “Even if he had not given evidence I would have refused bail in this matter,” he said.

Mr Justice Burns remanded Mr Hughes in custody to May 15th, when the full hearing of his extradition to the UK will take place.

The haulier was joined by video-link from Cloverhill Prison on Thursday and wore a face mask for the short hearing. He is the second man from Northern Ireland to be arrested here on a European Arrest Warrant (EAW) as part of the Essex police investigation.

Mr Hughes, who owns a haulage firm, was arrested on the evening of April 20th at his home in Co Monaghan following the endorsement of a EAW issued by the police in Essex.

1 How fraudsters used lockdown to lure Irish victims into boats and caravans scam
2 Miriam Lord: Minister for Agriculture tries to get himself out of the manure
3 Garda detective charged with making death threats against ex-partner
4 Driver whose car ‘rolled nine metres’ into front of other vehicle loses rear-ending claim
5 Martin criticises ‘over-focus’ on Border poll ahead of Foster meeting
Real news has value SUBSCRIBE