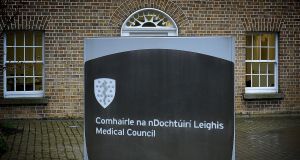 The president of the High Court said while he understood there had been resource issues, the Medical Council’s decision to discontinue the previous practice and replace it with an “honour system” was in the court’s view the “wrong decision.”

The President of the High Court has welcomed the Medical Council’s decision to put a system in place to check the disciplinary records of doctors seeking to work here.

Mr Justice Peter Kelly made his remarks when confirming the suspension of Dr Ragheb Nouman.

Dr Nouman was suspended because he had failed to disclose, when seeking registration here last year, he had been struck off in the UK over three years ago.

The suspension, pending the outcome of an investigation by the council’s Fitness to Practise Committee, was necessary to protect the public, the judge ruled.

Dr Nouman was struck off the register in the UK based on findings his fitness to practice was impaired due to misconduct and poor professional performance, including making racist comments about Indian doctors and Indian people in general.

A fitness to practice committee in the UK had noted Dr Nouman had said he was “not racist” but had allegedly made comments including that Indian doctors “will be the downfall of the NHS” and Indians “should clean toilets, not practise medicine”.

He was the subject of an investigation in Ireland after information about his suspension in the UK was referred to the Medical Council.

Dr Nouman, a Syrian national who qualified as a doctor in Romania, did not attend Tuesday’s hearing but, in written submissions, urged the court to lift his suspension.

He denied he was a racist, said that there had only been an issue at one UK hospital where he had worked, and said he had been given a poor professional assessment because of the alleged racist remarks.

Mr Justice Kelly said Dr Nouman should be suspended because he had misled the Irish Medical Council.

The doctor had claimed he did not inform the Irish Medical Council about his disciplinary issues in the UK due to an oversight, the judge said.

The judge did not accept the doctor’s argument and noted, in his application to be registered in Ireland, Dr Nouman had submitted a CV which said he had worked in Romania for several years when in fact he was working in the UK.

The judge also said Dr Nouman had worked in Scotland after he had been suspended by the British Medical Council.

In all the circumstances, the suspension should be continued, he directed.

The judge had previously expressed the court’s concern about how a doctor suspended in a neighbouring jurisdiction had managed to get registered by the Medical Council here.

The Council, represented by solicitor JP McDowell, said up to July 2015 his client had created disciplinary overseas records after it received alerts from other competent authorities about medical practitioners not on its register.

This was done with a view to providing a form of a check should a doctor the subject of the alert or disciplinary procedures seek to obtain registration in Ireland.

This system, after some consideration, was changed due to factors including the large increase of first-time applications for registration and staffing resources.

It was replaced by a requirement for applicants to provide certain declarations, and certificates of good standing with the body they had been registered before they applied to be registered in Ireland.

As a result of this case, the Medical Council had decided to revert to a similar system as had been in place prior to July 2015. It had also done a back check of doctors registered between July 2015 and now.

Mr McDowell said the backcheck had revealed, during the relevant period, just one other doctor apart from Dr Nouman had been registered here who had not declared a previous disciplinary matter.

It is believed the doctor in question was no longer working in Ireland.

Mr Justice Kelly welcomed the council’s decision to reinstate a similar system to that in place up to July 2015 which had operated as a safety check against those acting dishonestly with the council.

While he understood there had been resource issues, the Council’s decision to discontinue the previous practice and replace it with an “honour system” was in the court’s view the “wrong decision.”

Noting the results of the backcheck, he said just a single “rogue doctor” could cause great harm to the public.

Life experience had also shown honour systems cannot work when people are being dishonest, he said.

There had been recent examples of doctors doing dishonest things, including forging work references, details about their work experience and prescriptions, he said.

Dr Nouman was registered here in July 2018 and worked in South Tipperary General Hospital, Mayo University Hospital and Our Lady’s Hospital, Navan, having been referred by an approved locum agency.