Man wins ‘fleeting defamation’ case against Luas and is awarded €500 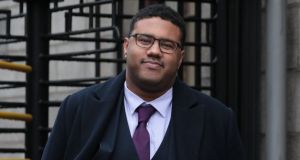 Leon Diop, of Ashgrove, Springfield, Tallaght, Dublin, pictured leaving court. The judge said he and and his brother Adam “were most impressive witnesses.” Photograph: Collins Courts

A man has been awarded €500 and his legal costs after the High Court found he was subject to a “fleeting defamation” during an incident in which he claimed a Luas tram security guard racially profiled him and his brother.

After he lost his defamation case in the Circuit Court, he appealed to the High Court.

On Thursday, Mr Justice Robert Barr found there was a “fleeting defamation” of Mr Diop but, “having regard to the fact it was almost immediately expunged”, he could not find any lasting damage to his reputation or good name.

In the circumstances, he awarded nominal damages of €500 and granted Mr Diop his costs in the High and Circuit Courts.

The court heard Mr Diop, who was president of Maynooth University Students’ Union at the time, got on the tram in Dublin city centre with his brother Adam on June 8th 2016.

Two STT security guards boarded at Blackhorse. The guards claimed there had been a problem that day with three black youths hopping on and off the tram without tickets and generally behaving badly.

As the guards got on, a black youth got off and immediately the first security guard went over to the Diop brothers.

Mr Justice Barr was satisfied the security guard only asked the Diops for the tickets after Leon said: “This is slightly racially profiling.”

The judge rejected the security guard’s evidence the “racially profiling” comment was made when he (guard) said “get off” to the youth who exited the tram when the security got on.

He said the guard’s evidence was a lie “to justify his approach to the plaintiff and his brother in seeking production of their tickets.”

Both security guards had claimed the racial profiling comment was made before tickets were asked for. This was so as to avoid an accusation they had in fact been engaged in racially profiling, he said.

The judge found the request to produce their tickets was not defamatory. However, when the first guard said, “I don’t like your attitude, just step off please”, and gestured at Leon to leave the tram, this was defamatory, he said. The brothers had valid tickets for travel.

The second security man issued a countermanding order permitting the brothers to remain because he could see his colleague had “overstepped the mark”, the judge said.

There was a “momentary defamation” which was almost immediately corrected such that people in the vicinity could not have reasonably formed any lasting adverse opinion of the plaintiff, he said.

The judge also rejected the defendants’ argument that the posting by Leon of an account of the incident to his 1,000 Facebook followers was not a republication such as to diminish any award of damages.

In relation to the claim that the first security guard called Leon “a c***” as he left the carriage, the judge was not satisfied any such remark was made.

It was not for the court to say whether the actions of the security man in selecting the Diops for ticket inspection, alone among passengers that day, amounted to racial profiling or discriminatory conduct.

“All the court can say is that the plaintiff and his brother were most impressive witnesses.”

They were treated badly but the court “cannot award compensation for the fact that people may have been treated badly or unfairly; this was purely a case about defamation.”

Mr Diop graduated in psychology through science while Adam, who did not bring a claim, graduated in multimedia studies from DCU.