Kerry slug and bat habitats will be disturbed by greenway, court told 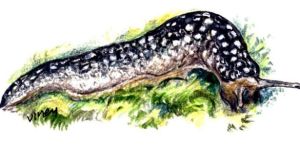 The Kerry slug, a species found in large numbers on the greenway route. Illustration: Michael Viney

A proposed cycling and pedestrian greenway will disturb the habitats for the Kerry slug and the lesser horseshoe bat, it has been claimed in a High Court challenge.

Environmental campaigner Peter Sweetman wants the court to quash the granting of licences which removed the need for consent for measures to compensate for loss and disturbance from the project to habitats for these two species.

The 32km South Kerry Greenway, between from Glenbeigh to Carhirsiveen, will run mainly along the former disused Southern and Western Railway which operated from 1892 to 1960.

Mr Sweetman’s action is against the Minister for Culture, Heritage and the Gaeltacht.

Kerry Co Council, which is proposing the Greenway, and An Bord Pleanála, which has yet to decide whether to grant permission, are notice parties.

Mr Sweetman’s lawyers were granted leave, on a one-side only represented basis, to seek a judicial review of the Minister’s September 2019 decision to issue licences to the council which purported to authorise derogations from the EU habitats directive which prevents the deliberate capture or disturbance of the two species and their breeding sites.

Mr Sweetman claims the Minister’s decision was made outside her powers and for the improper purpose of removing the need for consent to compensate for the loss and disturbances to their habitats.

He claims it also facilitates the circumvention of the habitats directive in the making of the planning decision itself and in relation to compulsory purchase orders (CPOs) for land along the route.

One of those CPOs will relate to an abandoned house, two metres from the proposed route, which is a summer roost for the lesser horseshoe bat.

Mr Sweetman says the council proposes to carry out structural enhancements to the abandoned house to encourage the bats to stay and will install CCTV cameras to allow passers-by view the roosting bats.

Without mitigation measures, construction related noise could disturb the bats and cause them to leave, Mr Sweetman says. Some 250,000 cyclists and walkers expected along the route will be another potential for disturbance.

Two sections of the greenway will require the installation of rock filled nets or gabions as a safety measure. Those will be within an area which is “the known range of the Kerry slug”, he says.

Mr Sweetman says part of the slugs’ habitat will be destroyed by this despite proposals to trap and remove them and other measures to later promote a habitat attractive to the slugs.

There is no evidence satisfactory alternative routes which would not involve disturbance to the slugs and bats had been considered, he claims.

Mr Justice Charles Meenan granted Mr Sweetman leave to bring proceedings and made the matter returnable to court in February.